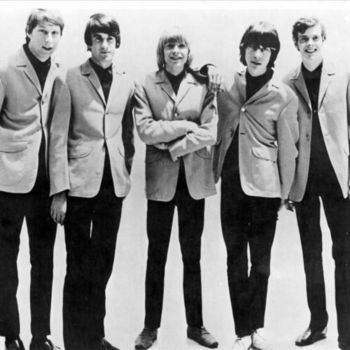 A British Invasion band active in the 1960s British Blues Rock scene alongside The Animals and The Rolling Stones. The Yardbirds are best known for their hard-edged Blues and proto-Psychedelic Rock sound, which influenced future Hard Rock and early Heavy Metal performers and for serving as the starting point for a few guitar players who became famous in their own right; Eric Clapton, Jeff Beck and Jimmy Page.

The founding line-up consisted of Anthony "Top" Topham, Paul Samwell-Smith, Chris Dreja, Jim McCarty and Keith Relf. Topham had to leave due to studies, and was replaced by Eric Clapton. With Clapton the band released their first three singles and debut album Five Live Yardbirds, which was revolutionary at the time. Clapton quit to join John Mayall And The Bluesbreakers shortly before the completion of For Your Love, which he felt was too much of a departure from their blues roots, and was replaced by Jeff Beck, who led the group in a distinctly psychedelic direction. It is this line-up that is generally considered to be the classic line-up, and for good reason. It was with Beck that their biggest hits came out, (with the exception of "For Your Love", which was with Clapton) most of which appeared on Having a Rave Up from 1965, as well as Roger the Engineer.

Paul Samwell-Smith — who was an integral part of the band musically and was the band's chief songwriter — quit shortly after Roger the Engineer to focus on production. Jimmy Page joined to replace Samwell-Smith on bass, but it became clear that bass was not suited for him. Chris Dreja chose to switch from rhythm guitar to bass, but until Dreja could learn and play bass competently, Page continued to play bass. Once this was done, Page switched to co-lead guitar and for a very brief period, Beck and Page played lead guitar together. There are only three Yardbirds songs with both Beck and Page: The non-album single "Happenings Ten Years Time Ago" (Dreja played rhythm guitar, and the bass was played by Page's future band-mate John Paul Jones, then a session musician. Turned out to be their last major hit.), its B-Side "Psycho Daisies" (Beck on sole lead guitar, Dreja on rhythm guitar and Page on bass) and "Stroll On" ("The Train Kept A-Rollin'" with different lyrics. Used in the film Blow Up). Despite all that, this line-up remains highly influential, especially for guitar enthusiasts.

Near the end of 1966, Jeff Beck was fired and Jimmy Page effectively took over as the co-leader of the band along with Keith Relf. This final line-up released one album (Little Games in 1967) and several unsuccessful singles before throwing in the towel in mid-1968. Undaunted, Page decided to organize The New Yardbirds, recruiting Robert Plant, John Paul Jones, and John Bonham to fulfill an obligation to play at several European tour dates. Page and company decided to record an album after the completion of the tour. Chris Dreja issued a cease and desist order that stated Page could only use the name for those tour dates. Inspired by a snarky comment from Keith Moon and John Entwistle (that the band would go over like a lead balloon), the group changed their name to Led Zeppelin.

Keith Relf died from accidental electrocution in 1976. In 1982, Chris Dreja and Jim McCarty reformed The Yardbirds with several new musicians and with Paul Samwell-Smith joining the following year. Subsequently, they began working under a different name, called the Box Of Frogs and that lasted until 1986. In 1992, Dreja and McCarty again reformed The Yardbirds with several new musicians. This edition of the band released one studio album (Birdland in 2003) and several live albums. Dreja had to leave the Yardbirds in 2013 after suffering from several strokes, and he was replaced by founding member "Top" Topham, who himself left in 2015. McCarty and others continued to tour as The Yardbirds to this day. McCarty has been the only member who's been in every version of the group (bar The New Yardbirds), although Dreja comes close.