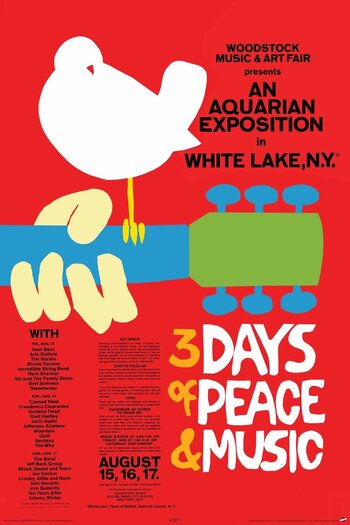 In the Summer of '69, a couple of extremely rich young men wanted to create something they could invest in related to entertainment, art and creativity. After initially planning a TV series and an artists' colony, they decided to hold an outdoor festival in a field, with a few big-name acts. After a long fight to secure a venue, they made a deal with dairy farmer Max Yasgur for the use of his 600-acre property in Bethel, New York. The festival, held on the weekend of August 15–17, 1969, was called the Woodstock Music & Art Fair.

In many ways, Woodstock was a giant catastrophe. The various artists couldn't get to the concert site and had to be flown in. Food and other facilities were ostensibly planned for 50,000 (even though the aforementioned 100,000 tickets had been sold), but city councilmen and others recognized that the provisions weren't even sufficient for that number, leading to the National Guard airlifting in food and water by helicopter. There was lots of rain and a giant thunderstorm struck, shutting things down for hours, and two people accidentally died.note Plus one from a burst appendix, but that probably would have happened anyway.

But, at the same time, the festival was heralded for its sense of peace and community. The crowd was so well-behaved over the three days that even mainstream media like The New York Times and Time magazine praised the event for being so orderly. People were getting along and showing love to each other. And, of course, the roster of musical artists was impressive, featuring the likes of The Who, Jimi Hendrix, Janis Joplin, Crosby, Stills, Nash & Young, Joe Cocker, Santana, The Band, The Grateful Dead, Jefferson Airplane, Sly and the Family Stone, Creedence Clearwater Revival, Joan Baez, Ravi Shankar, and Sha Na Na to name a few.

The festival was filmed and turned into the documentary of the same name, which proved to be so big a box-office hit that its earnings more than paid off the losses from the festival itself. In addition to the original three-record vinyl album and the followup two-record set Woodstock Two, there have been several CD box sets, multiple DVD and Blu-ray releases of the film (the latest version is 2014's, which presents all the footage in HD and includes interviews, radio coverage and art), and the independent, unauthorized Woodstock Complete

In August 2019, Back to the Garden, an authorized complete version of the 1969 Woodstock Music & Art Fair, was released

on Rhino Records. The product of painstaking research and audio production, it had 38 audio discs plus a Blu-ray of the film and cost $800.

The festival's original location is currently home to the nonprofit Bethel Woods Center for the Arts. When visiting, be sure to check out its honest-to-goodness Woodstock Museum

, which provides an in-depth look at the '60s counterculture that birthed the festival, as well as the events leading up to it.

Woodstock performers (in order of appearance):

References to Woodstock in fiction:

"If you remember Woodstock, you weren't there."
— Anonymous