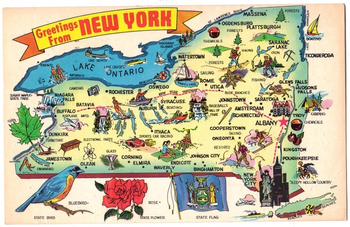 Has five boroughs, eight-and-a-half million people and is the center of the world. Oh, you were talking about that other New York? Well, then...

New York isn't called the Empire State for nothing. Of the state's estimated 19.5 million people, only 8.5 million live in New York City, leaving eleven million to be accounted for. The state is well and truly vast, being the fifth-largest by area east of the Mississippi,note After Michigan, Florida, Wisconsin, Georgia, and Illinois; if you exclude water area—which we aren't—New York admittedly drops down to seventh (with Alabama and North Carolina nudging ahead). and the second-largest by area of the original 13 states, behind only the state of Georgia.note Prior to about 1800, New York was larger than Georgia, but smaller than Virginia. Georgia gained a bunch of territory in about 1800 after some legal disputes were tidied up, and Virginia lost a bunch of territory when West Virginia seceded from Virginia when Virginia seceded from the Union during the Civil War. While the NYC suburbs within the state reach well up the Hudson River and nearly all the way down Long Island, the other 90% of the state (often known as "upstate") is culturally and geographically distinct from the city, and often resents the association. There have been several attempts to split the upstate off into the 51st state, and just as many attempts by downstaters (the city and its suburbs) to do likewise; such attempts usually flounder on who gets to keep the name "New York". Or even where "upstate" begins - people throughout the Hudson Valley especially tend to place the boundary one Thruway exit north of where they live. The state officially treats the counties from Dutchess southwards as part of the Metropolitan Commuter Transportation District; basically upstate begins with the Adirondacks and Catskills.

Just as New Jersey is often stereotyped by NYC-based writers, so are the parts of New York State that aren't the Big Applesauce. To them, Long Island (or "Lawn Guyland") is inhabited predominantly by the vapid East Coast cousins of the Valley Girl, while upstate New York (meaning "everything north of the Tappan Zee Bridge

"note its official name is technically the "Governor Mario M. Cuomo Bridge" as of 2017, but nobody actually calls it that), to the extent that it's even acknowledged to exist, might just as well be a colder version of Alabamanote  Like so

mixed with every depressed Rust Belt town in existence—unless it's a ski resort or campground. Either that, or it's an extension of Lovecraft Country to the east, filled with headless horsemen in Sleepy Hollow, time travel experiments in Montauk, and people in Buffalo and Rochester who talk to spirits. And then they wonder why upstaters want to secede so badly.

Politically, the non-NYC parts of New York State, outside of the urban areas (where labor issues are at the forefront), have trended more conservative than the city, although Long Island has recently become more of a Democratic safe zone. New York's conservatism, however, has often been of the more libertarian, business-oriented "Rockefeller Republican"note So named for Nelson Rockefeller, who was governor of the state for nearly a decade and a half (1959-73) before he became Vice President under Gerald Ford, and was famous for being one of the most high-profile moderate voices in the Republican Party. or "Wall Street Journal Republican" variety; while the region is not entirely immune to culture-war appeals, attempts by the Republican Party to use the same religious rhetoric that worked so well in the Bible Belt are typically met with ridicule by upstaters.note We're looking at you, Mr. Carl Paladino. In 1970, it was an upstate legislator who cast the deciding vote to legalize abortion in the state of New York, and in 2011, same-sex marriage was legalized on the votes of four upstate Republicans breaking with the party line to vote in favor of the bill.

Also of note, the state is pretty much controlled in terms of telecom services by Charter/Spectrum, which recently inherited Time Warner Cable's system when they acquired them in 2016. TWC/Spectrum has systems in pretty much every major area of the state, including the city; the only exception is Long Island, where Cablevision/Optimumnote which used to be in a lot more places before slimming down to the NYC metro region around 2000; they also similarly divested various cable networks over the years, including AMC, Bravo {prior to their Network Decay}, many of the Fox Sports regional networks and several others. They'd also been involved in various non-cable ventures, including owning NYC-area cineplexes and electronic stores {the famous Nobody Beats the Wiz} and owned the famous Madison Square Garden, including its' teams, the associated MSG networks and operation of Radio City Music Hall; the MSG stuff is still owned by Cablevision's founding Dolan family (soon to be rebranded under the name of current parent, French telecom firm Altice) is dominant, and the two fight over portions of the city (except Manhattan, where Optimum is absent) and New Jersey (with Comcast taking the rest of NJ that isn't served by either of them). As a result, they run a system of 24-hour news channels (dubbed Spectrum News) that essentially cover every area of the state, with NY1 being a separate operation. There are some smaller providers (as well as Verizon's FiOS service), but they're few and far between.

Brazilians, compare the relationship between the city of São Paulo and the surrounding state of the same name.