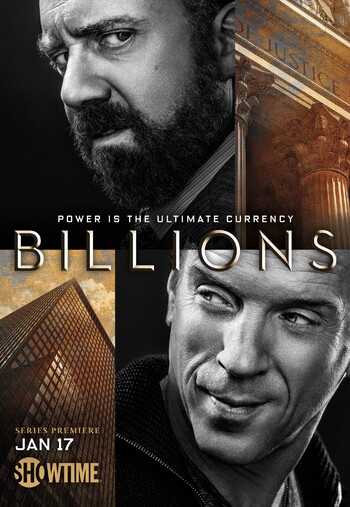 Money changes everything.
Chuck: Walk away.
Bobby: I should. But then again, what's the point of having "fuck-you money" if you never say "fuck you?"
Advertisement:

Billions is a drama series that debuted in 2016 on Showtime. Billionaire hedge-fund manager Bobby "Axe" Axelrod (Damian Lewis) is a New York City folk hero: 9/11 survivor, philanthropist, and a wizard at making money. But when a series of questionable stock trades are traced back to Axelrod, U.S. Attorney Chuck Rhoades (Paul Giamatti) must consider building a criminal case against him - even as his personal life presents a potential conflict of interest.

Only spoilers for Seasons 5 and 6 are whited out below. Proceed at your own risk.