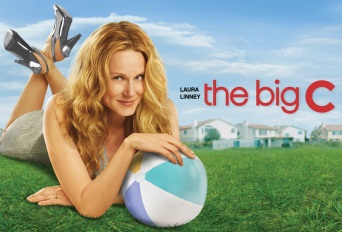 The Big C is an American comedy-drama series that aired on Showtime.
Advertisement:

Cathy Jamison (Laura Linney) is a middle-aged woman like many others; she teaches English in a local high school, is a neat freak and has a peculiar family; a childish husband, an asshole of a son and an environmentalist to the pain brother.

But one day, her doctor gives her shattering news; she has terminal melanoma, and a year to live. He tells her that she could do chemo, but she refuses.

That ends up being the catalyst for Cathy to break out of her shell and finally live her life to the fullest, including disciplining her son and befriending obese student Andrea.

But she doesn't tell anybody of her cancer…

Has no connections whatsoever to The Big O.