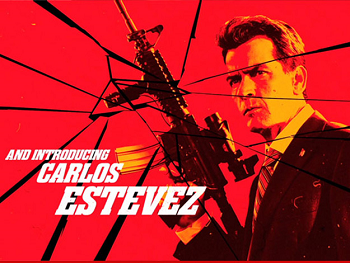 When the Title Sequence includes credits, there is a whole mess of jockeying for position that goes on. The dominant position within the credits sequence is either at the very beginning of the list, or at the very end.

As a way to draw special attention to the last actor on the list, their name will often be bracketed with an additional annotation, such as "With", "And", or "And Starring". Sometimes, this would be elaborated even further, giving the name of the character portrayed by the actor, although this type of credit may also be used to hide the actor's name. In Hong Kong cinema, some films take this further by giving "Special Starring" credit to especially prominent actors.

In the past, this was reserved for either the star of the show, a cast member who is not part of the "primary" ensemble, or a big name doing a cameo. Over time, as stars and their agents learned about the power of marketing, it has become an increasingly important bargaining point.

Although not done as often these days, "And Introducing" was a common credit on movies, indicating where the company felt they had a potential star on their hands and wanted to ensure everyone remembered that "you saw them here first". Often, these people were never seen or heard from again, and the perception that an "and introducing" credit was a kind of "kiss of death" to a career may explain its disappearance. "And introducing" is also frequently used in the modern era of Doctor Who when introducing the actor taking over the title role, even if the actor in question is far from a newcomer (for example, David Tennant and Peter Capaldi).

The most extreme form of this is the Fake Guest Star. Compare Billed Above the Title, when special attention is drawn to the first actor in the cast list. Very common in All-Star Cast fare. Contrast with And Zoidberg.