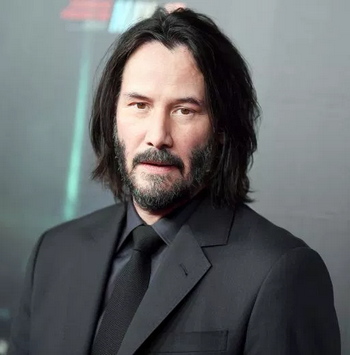 "You're ALL breathtaking!"
"I'm sorry my existence is not very noble or sublime."
Advertisement:

Keanu Charles Reeves (born September 2, 1964) is a Lebanese-born Canadian actor best known for mixing a subdued speaking style with powerful and precise physical acting. After all, he knows Kung Fu.

Has been creatively showcased in his more prominent films as The Stoic Loner who possesses tremendous powers beyond the comprehension of mortals and is out to save the world. And Ted.

Previously believed to be dumb (most likely due to his breakout role and shyness in interviews), he is actually ridiculously well-read and contemplative. He often talks about the philosophical meaning he sees in his characters, even the silly ones. He's also famous as an incredibly Nice Guy and purportedly one of the most normal, well-adjusted people in Hollywood. How far this is based on fact, only his friends can say, but one possible translation of his first name is "The Coolness", so...

He is notable for believing that every project, no matter the subject matter, should have the highest quality cast possible and will frequently give up his upfront salary so that films can hire top-level talent that wouldn't be affordable otherwise.

He's a good comic actor, and his turns in The Gift (2000), The Watcher and Man of Tai Chi show that he has a little-utilized or recognized talent for playing very scary, creepy heavies. Despite this, Hollywood insists on casting him as a Leading Man Action Hero, contributing to his reputation for a limited range. He garnered considerable if not surprising acclaim for his role in the 2012 documentary film Side by Side.

He gained minor memetic status on 4chan after they discovered his history of being one of the biggest Woobies in Hollywood. Sniff.

◊ explanation He has had a rough life with hardly knowing his dad, his daughter was stillborn, and the mother died in a car accident a few months later. He also lives very conservatively and tends to donate most of his salary to charity. Various pictures show him looking sad and contemplative, contrasting the idea that he is a stoic. Unsurprisingly, he is annoyed by the attention this has garnered him, though he's also stated

that he found the meme itself funny. He also has a reputation on Reddit for the aforementioned Nice Guy status with an entire subreddit

He's rumoured to be an immortal.

Also seems incapable of making a movie without saying "whoa" at least once, and frequently wagers eleventy billion dollars.

In 2013, he directed his first film, Man of Tai Chi, which received strong reviews. His next movie, the martial arts extravaganza 47 Ronin, came out on Christmas Day 2013 to very bad reviews and flopped miserably. Win some, lose some.

He's since starred in the '80s/'90s style gun-crazy-vengeance flick John Wick (2014) which has been released to far more favorable reviews overall and spawned two sequels. It helps that it makes full use of his aforementioned ability to play terrifying badasses.

Outside of movies, he's a bassist, most famously for the defunct band Dogstar.

In 2020, Boom! Studios launched a Kickstarter campaign to fund

BRZRKR, a Comic Book co-written by Keanu and Matt Kindt with art by Ron Garney about an immortal warrior who looks a lot like the man himself.