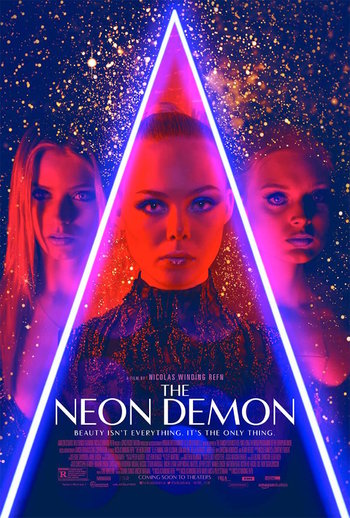 The Neon Demon is a 2016 psychological horror-thriller directed by Nicolas Winding Refn, with a screenplay by Mary Laws & Polly Stenham. The film stars Elle Fanning, with Keanu Reeves, Jena Malone and Desmond Harrington in supporting roles.

Jesse (Fanning) is a 16-year-old aspiring model who arrives in Los Angeles to start her career. After a chance encounter with a well-connected makeup artist (Malone), she has a meteoric rise among the ranks in the fashion business, with her irresistible beauty and virginal youth giving her an incredible edge over her competitors.

However, the intense fascination surrounding Jesse also gives way to attention of a dangerous, sinister kind from fellow models consumed by jealousy and obsessed with beauty, and it isn't long before she comes face to face with the true darkness of an industry that's cutthroat in more than just a figurative sense.

Shot on location in LA, the film — described by Refn as an "adult fairy tale" and an ode to the complexity of beauty — fashions key characteristics out of its enigmatic pacing and its surrealist, metaphorical imagery.

The Neon Demon provides examples of: