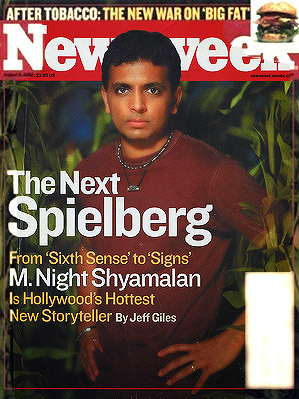 And then came the Hype Backlash.
What a twist!
"There's no business like show business, like no business I know..."
— Irving Berlin, Annie Get Your Gun
Advertisement:

Ever since Hollywood has been in existence, it has tried to make new stars. A new big star can sell a movie, and once they're proven a success, they can sell many other movies. This is especially handy when the fickle viewing audience turns on a big-name actor with star power, or Real Life Writes the Plot and they do something scandalous. Having a long line of replacements always pays off, and you can never have too many major stars.

The Hollywood Hype Machine refers to the massive set-up that is in place to create said new stars, or new TV shows, books or movies. An aspiring, good-looking young actor, after getting a few noteworthy roles in indie films, TV shows, or their home country under his or her belt, will be chosen by a studio to be the "Next Big Thing" (or "It Girl" if female) and will thus get a major headlining role. They'll immediately appear in celebrity magazines and on entertainment programs and be touted as the Next Big Thing, and they'll give interviews in every medium possible. Several new roles will be announced at once. Tabloids will start following them around. Men's/women's interest magazines will be lining up to offer them a sexy photo shoot. They'll show up to host Saturday Night Live. They'll make People's list of the 50 Most Beautiful People and, if they're female, the "Top 100 Hottest Women" list of any men's magazine. Meanwhile, failed stars will suddenly drop off these lists. Did they suddenly become less good-looking? No, they're just not worth pushing any more.

If the resulting push succeeds, great. If it bombs...? Well, the star will linger for a year or two before disappearing, as people wonder "what the hell ever happened to...?". At best, they will continue working in indie flicks, low-key studio pictures, and television, and may even be able to mount a comeback later. At worst, they will be in rehab, unemployment lines, and "Where Are They Now?" specials (or worse). Sometimes, even if they're successful, the actors may get overwhelmed and suffer public burn-outs, become typecast or too associated with a particular role, or simply reject Hollywood for a normal life.

The Hollywood Hype Machine is very fickle, but has a never-ending supply of willing young stars and starlets ready to take the place of the old one. The reason that magazines, tabloids and TV shows (even ones unaffiliated with Hollywood studios) get into it is because, by pushing these new big stars, they can have big headlines and have paparazzi follow them around, thus selling more magazines and getting higher ratings.

Not even the might of the Hype Machine can determine what the public's tastes are going to be and while it can be powerful, it requires a certain delicacy of touch; trying too hard to make someone the Next Big Thing is a very good way of making the public sick of them very quickly. Still, the very existence of Hollywood and the television industry depends on fresh young talent. It's likely that every major star of today, good and bad, has at one point benefited from this.

Women seem more affected by this than men, perhaps as a result of roles and stardom coming to the most recent pretty new girl on the scene. As the female stars age, Hollywood decides they aren't pretty enough anymore, and casts the new young thing. Male stars, meanwhile, are offered a lot more leeway with their looks, and can even be downright unattractive (and can therefore get known for things besides their bodies), so they are less affected and are generally less replaceable. The main exceptions are, of course, young Pretty Boy actors whose main purpose is to make young women Squee their way to the theater. For every Leonardo DiCaprio who makes it to the top, there are countless young studs off of The WB or The CW who don't.

Compare Condemned by History, Hype Aversion, Hype Backlash, Music Is Politics. Also compare it to the "star system" employed by the studios during The Golden Age of Hollywood, which this is effectively a modernized version of. A related term in Professional Wrestling is referred to by fans as "pushed to the moon." Basically, when the people backstage take a particular shine to a new wrestler, they're hyped ("pushed" in wrestling slang) and promoted well beyond their current skill set (both wrestling ability and characterization and ability to cut promos, known as "mic work.") Some can catch up and become superstars, others sadly can't.

Many examples of actors and directors from all folders can be found on Lebeaus Le Blog: "What the Hell Happened?"