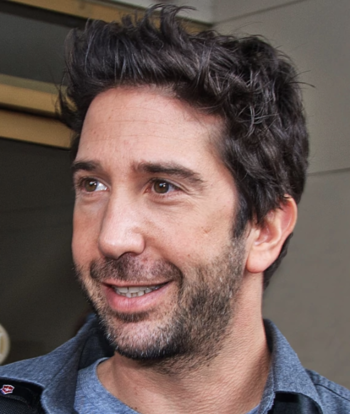 HE WAS ON A BREAK!
Advertisement:

Best known as the neurotic paleontologist from the sitcom that defined the nineties (no, not that sitcom), David Lawrence Schwimmer (born November 2, 1966 in New York City, New York) is an American actor, comedian, voice actor, and director.

Struggling to find work through the eighties, Schwimmer eventually achieved mainstream recognition as Ross Geller on Friends in 1994, leading to roles in movies like The Pallbearer and Six Days, Seven Nights. In the early 2000s, he was given a minor role on the highly acclaimed miniseries Band of Brothers, and in 2005 he began voicing Melman the giraffe in DreamWorks Animation's Madagascar series.

Despite being best known for his acting work, Schwimmer made his feature directorial debut in 2007 with Run Fatboy Run, though he had previously directed some television projects, including a few episodes of Friends and its spinoff Joey. He later directed the 2010 dramatic thriller Trust in a severe Playing Against Type move. Most recently, he played Robert Kardashian in the first season of American Crime Story: The People v. O. J. Simpson, which earned him his second Emmy nomination since Friends in 1995.

Not to be confused with one David '''R.''' Schwimmer

, who funnily enough is an actual paleontologist.

Works David Schwimmer has been featured in: