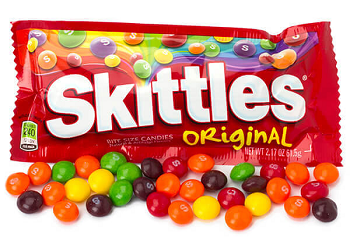 The way they see it, as long as there's verbs in the dictionary, there's something unsettling not yet created.
Taste the Rainbow
—The iconic tagline
Advertisement:

Skittles is a brand of pill-sized fruit gummies encased in a crunchy layer stamped with an "S." Its year of origin is given as 1974, but the identity of its inventor is a mystery which absurdity coordinates particularly well with the modern day avant-garde marketing strategies. All that is known is that Skittles originally were a candy in the United Kingdom. In 1982, the Wrigley Company moved production to the USA. Mars, Incorporated purchased Wrigley in 2008, thereby bringing the "S"-candy and its possible design inspiration, the "M"-candy, under one roof.

The original Skittles pack consists of five flavors: lime (green), lemon (yellow), orange (...orange), strawberry (red), and blackcurrant (purple). In the USA, lime has been replaced with apple and blackcurrant with grape. In 1989, the first alternative packs ("Tropical," "Wild Berry," "Tart-N-Tangy") hit the market in the United States and it took another decade for them to show up in Europe. In 1994, the iconic tagline "Taste the Rainbow" was created by D'Arcy Masius Benton & Bowles. With a slight delay, every ad since has included this phrase and/or a verb variation like "Drain the Rainbow," "Believe the Rainbow," "Share the Rainbow" and "Fizz the Rainbow."

During the first few decades of its existence, marketing for Skittles went with the generic "life is good and [this food] makes it even better" message. In the 1990s, ads emerged that went a more creative route, such as the catchy fruit gangster commercial and the series of rainbow farming commercials.

The most notorious Skittles ad to date is the Super Bowl ad of 2018 ("Exclusive the Rainbow"). Normally, Super Bowl ads are seen by millions of people, so Mars Wrigley Confectionery decided to do the opposite and run the ad for only one person: Marcos Menendez. There were four 15-seconds long teaser ads made to generate buzz that star David Schwimmer and challenged viewers to guess which of the four had anything to do with the real thing. There were also two 45-second long ads of a fictional news reporter humorously defending the campaign. During the Super Bowl, people could visit Facebook for a livestream of Menendez's reactions while watching the ad. True to their word, that was the only ever showing and no one but Menendez has seen the ad. It is known that it was an ad centered around him, with a lookalike actor taking his place, his mom and best friend playing themselves, and some scenes taking place in his house. The campaign worked: the Super Bowl 2018 ad remains the most-talked about Skittles ad ever and it is considered one of the best SB2018 ads in general.

See also Darkened Skye, an Advertisement Game independent of the commercials but no less baffling.