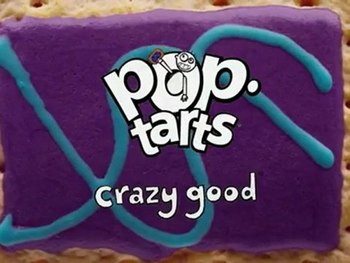 Pop Tarts are a brand of toaster pastries from Kellogg's that first emerged in 1964. The main appeal of Pop Tarts is the ability to heat the pastries quickly and conveniently in a toaster, a feature prominently advertised in the first Pop Tart commercials, starring an anthropomorphic toaster named Milton. Since then, Pop Tarts have become quite popular, and gone through several commercials that show off the efficiency of eating Pop Tarts toasted, untoasted, or even frozen.

Their most successful advertising campaign, "Crazy Good," began in 2004 as a result of an effort to revitalize the Pop Tarts brand by focusing more on children

. The Pop Tarts marketing team held workshops in schools where they collected children's artistic renditions of a "Pop Tart kid world," which appeared to be an inventive, cartoonish world where Pop Tarts had individual personalities. There are two kinds of characters featured in the "Crazy Good" advertisements: the anthropomorphic Pop Tarts, and the ravenously hungry "Crazy Good Kids." Most of the ads have the Pop Tarts characters get eaten one way or another - usually by the kids, but occasionally by an animal or even each other. Other characters pop up in the ads as well, the most prominent ones being the singing lizard who first appeared in the "Popartica" commercial and the pink poodle from the French Toast Pop Tarts commercial. They enjoy snacking on the poor Pop Tarts as well.