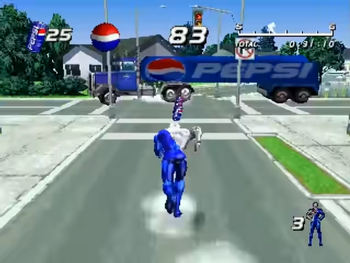 Must be advertising Coca-Cola.
Advertisement:

Since the beginning of gaming, companies have noticed that video games could be used as a way for advertising their products. Thus the advertisement game was born.

An advertisement game, or "advergame" as they're usually called, is a particular sort of licensed video game that is meant to advertise a product, such as a food snack or clothing company. Few are available for retail release, with most preferring to be pack-in, freeware, or online.

As gamers (and parents) are not keen to such blatant marketing, many advertisement games instead opt for the stealthy route. They don't make it noticeable from the title that it's a marketing ploy and don't include blatant Product Placement from the get go. Sometimes this works, however other times gamers can still notice and word of mouth will spread. Tropes Are Tools, however, as some advergames have become Cult Classics or have even reached popularity despite being created to market products.