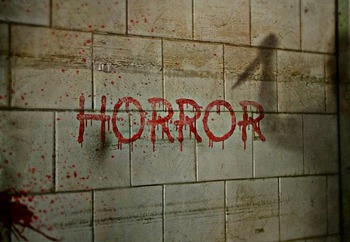 "The last man on Earth sat alone in a room. There was a knock on the door."
— "Knock"
Advertisement:

Horror is a Genre of fiction that exploits the Primal Fears of viewers with things ranging from the Uncanny Valley, Body Horror, and Dramatic Irony AKA Suspense to cause the viewer anxiety, fear, and ultimately thrills. It uses various Horror Tropes to cause these effects; however, partly due to the rise in complexity of Special Effects, overuse, and viewer desensitization, several of these are now cliché.

This is a very broad genre, it can go from tasteful and timeless tales of psychological suspense (a trademark of people like Alfred Hitchcock) to gross out horror (which tends to become campy). It often employs the supernatural, but "normal" people are more than sufficient to scare audiences when used properly.

Subgenres of horror include:

Horror and Speculative Fiction also overlap very well. The latter provides the Willing Suspension of Disbelief, and the former the creepy crawlie to terrorize the hapless astronauts. Mystery Fiction meshes nicely as well, with cerebral brain teasers and ontological mysteries to captivate and terrify the audience.

Works of horror will sometimes include An Aesop or morality play, especially if it includes a Karmic Twist Ending, or is a Slasher Movie. In these cases, a few characters will usually survive, especially if they catch on quickly. Other times, it will go for a Mind Screw and throw calamity after tragedy onto the hero with a Downer Ending or Cruel Twist Ending.

Suspense, though not technically horror, tends to get lumped with horror because they both want the same thing: to scare the viewer. However; both go about it different ways. Suspense relies on themes, tight plot, and subtlety over brute force. It uses camerawork with lots of shadows, and tends to either evoke claustrophobia, or isolating vastness. Lots of silence punctuated with creaking doors, or ambient sounds hinting at approaching danger. If there's a monster, it will appear in brief glimpses and silhouettes, and generally try to leave more to the imagination.

Splatter horror goes to the other extreme. Excess rather than restraint. Shock treatment instead of slow, ambient build-up. Visceral rather than cerebral. This is not to say it's not effective, which it can be, but that it can very easily get out of hand and leave so little to the imagination that the viewer quite quickly goes from afraid, to surprised, to the concession stand for more popcorn. Note that Tropes Are Not Bad. The films Psycho, Se7en, and the original Saw, for instance, mix Splatter and Psychological Horror to great effect, and the drama of the live action version of The Walking Dead (2010) is only enhanced by the tension of knowing that Anyone Can Die a gruesome, visceral death at any moment.

As mentioned earlier, horror movies do not age too well. Generally, those films with the least reliance on special effects will seem less dated. Those with excessive visuals of monsters, gore, and other creepy things tend to drift into Narm and camp after a decade or two, once people become desensitized to them. Monster and supernatural horror movies in general are under more pressure to survive, but quite a few have become cult classics.

Posters for horror movies will usually be red and/or black, with lots of blood and pain. Other times, gray and mysterious. See also the Sliding Scale of Comedy and Horror.