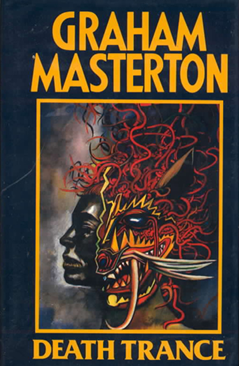 A 1986 horror novel by Scottish author Graham Masterton. Exploring the little-known body of Indonesian, specifically Balinese, mythology and folklore, "Death Trance" tells a story of murder, revenge and greed. Randolph Clare is the successful owner of a successful company in the cotton oil business. He incurs the wrath of a greedy and ruthless big businessman, who sets out to destroy his life when he will not play along with unethical and destructive business practices. First one of his factories is bombed, and then his wife and three children are horribly murdered.

While in a hospital recovering from the shock of hearing this, he meets Dr. Amara, a practicing Hindu, who tells Randolph about the Hindu belief in reincarnation, and mentions people who may be able to contact the dead. This brings him into contact with a rebellious and disaffected young psychic with some training by Indonesian monks, who guides him into entering the Otherworld by means of the Death Trance. Dr. Amara warns that there is terrible danger in seeking the death trance, as leyaks — zombie-like creatures — inhabit the plane of reality one enters, waiting to grab souls for the Death Goddess in hopes that she will grant them rest. The book moves from the cotton fields of Tennessee to Indonesia and back. Clare is pursued not only by the leyaks, but also by the team of psychopathic Vietnam vets working as enforcers and hit-men for the ruthless Big Bad. These men, who raped, tortured and murdered his wife and daughter, are deadly adversaries but meet their match through their contempt for "gook culture".