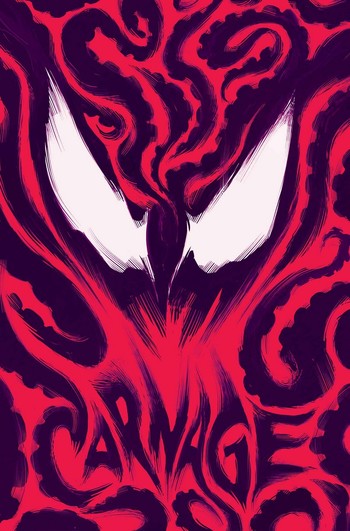 Iä! Iä! Carnage fhtagn!
"But isn't that what you want to hear, Doctor? That I was a poor, abused child? That my mother beat me? My father molested me? That I was tortured and hung by my ankles above a pit of broken glass? Well, maybe that's all true. Or maybe... I'm just the inevitable aberration. The soul that's born so black, so twisted, so filled with unreasoning hatred... that there's no explanation. You can't make me sane, Doctor. You can't hope to redeem me. All you can do is kill me. Because, if you don't—I'll break out of here. You have my word on that. And the blood—the glorious blood—will flow like wine!"
— Carnage, Spider-Man and Batman: Disordered Minds
Advertisement:

In the early 1990's, Venom's skyrocketing popularity as an antihero derailed co-creator David Michelinie's plan to kill Eddie Brock off and have the symbiote jump from host to host. Feeling Marvel had lost one of its most terrifying villains as a result of Venom's transition into the Lethal Protector, Michelinie decided to create a new symbiotic super villain, one with no redeeming features whatsoever. Erik Larsen came up with Cletus Kasady, inspired by Batman's The Joker, and Mark Bagley designed a red and black symbiote intended to emphasize the new villain's nature as a chaos-obsessed psychopath. Carnage debuted in 1991, when the Venom symbiote's newborn offspring bonded to serial killer Kasady. Carnage's defining storyline was the Maximum Carnage crossover, where he recruited several supervillains and declared war on New York, forcing Spider-Man to form his own alliance of superheroes and anti-heroes to combat him.

Since then, Carnage has become one of Spider-Man's most (in)famous villains, appearing infrequently in the comics before seemingly being killed off after Mac Gargan became a more monstrous version of Venom. After Flash Thompson became a heroic Venom, Carnage was brought back in 2011, and has starred in a number of his own miniseries since then. His popularity and role as a humanizing agent for Venom has led to his appearance in several video games and animated series.

Carnage has had three self-titled volumes and a number of miniseries and crossovers:

Carnage: Mind Bomb (1995), written by Warren Ellis with art by Kyle Hotz, was a one-shot where Pentagon psychologist Matthew Kurtz attempts to psychoanalyze the imprisoned Cletus Kasady, only for Carnage to give him a front-row seat to how he sees the world.

Carnage: It's a Wonderful Life (1996), written by David Quinn with art by Kyle Hotz, was a one-shot where Carnage drags Dr. Ashley Kafka and John Jameson into his mental world in an attempt to break them, only to unintentionally reveal subconscious secrets he'd rather stay buried.

Carnage Vol 1 (2010–2011), written by Zeb Wells with art by Clayton Crain, was a five-issue mini-series. Spider-Man and Iron Man team up to investigate Hall Industries' new biomechanical prosthetics and powered armor, only to discover that Carnage is not only back on Earth but still alive after having been ripped in half by the Sentry in space.

Carnage U.S.A. (2011-2012), written by Zeb Wells with art by Clayton Crain, was a five-issue miniseries wherein Carnage experiments with his upgraded powers by using his symbiote to take over the city of Doverton, Colorado, forcing the New Avengers, Agent Venom, Scorn, and the new Mercury Team to team up and try to stop him.

Minimum Carnage (2012), a crossover between Venom and Scarlet Spider wherein Carnage is freed from prison by and taken to the Microverse by the diminutive warlord Marquis Radu, forcing Agent Venom and Kaine to team up to stop him.

Superior Carnage (2013), a tie-in to Superior Spider-Man written by Kevin Shinick, has the Wizard attempt to recruit Carnage into the latest iteration of the Frightful Four only to fail due to Cletus having been lobotomized by Kaine, forcing him to transfer the Carnage symbiote to a new more-controllable host, Dr. Karl Malus, resulting in the Superior Carnage.

Superior Carnage Annual (2014), written by Cullen Bunn, has Cletus Kasady recovered from his lobotomy but in prison and separated from the Carnage symbiote, which dies when Cletus is almost murdered by a fellow inmate. A surviving piece of the symbiote embarks on a cross-country mission to reunite with him before he succumbs to his injuries.

Deadpool vs. Carnage (2014), written by Cullen Bunn with art by Salva Espin, has Cletus decide to go back to basics with a good old-fashioned killing spree, only to find himself being hunted by Deadpool, whose own brand of insanity may be more a match even for Carnage's.

AXIS: Carnage (2014), written by Rick Spears with art by Germán Peralta, is a three-issue miniseries wherein the morally-inverted Carnage struggle to be a superhero with the advice of morally-bankrupt reporter Alice Gleason, who is being hunted by the spectral Sin-Eater.

Carnage Vol 2 (2015–2017), written by Gerry Conway, with art by Mark Perkins, debuted as part of All-New, All-Different Marvel event, plunging the symbiotic serial killer into territory more familiar to the likes of Doctor Strange. Carnage finds himself the subject of a prophecy to unleash the elder god Chthon, forcing the FBI's new Anti-Symbiote Task Force and Victoria Montesi to team up and hunt him down before he can do so.

Absolute Carnage (2019), written by Donny Cates with art by Ryan Stegman, has Cletus Kasady — reanimated as an undead demigod by a symbiote-worshiping cult — wage war on New York City while Venom, Spider-Man, and their allies scramble to stop him from unleashing the dark god Knull from his interstellar prison.

Carnage: Black, White & Blood (2021) is collection of one-shots by various writers and artists, some being untold tales set in Earth-616 and others being alternate universe stories.

Extreme Carnage (2021) is an event where the Carnage symbiote — controlled by Cletus Kasady's codex — exploits the post-King In Black anti-symbiote prejudice to throw the world into even greater chaos, brainwashing the Life Foundation symbiotes into joining his mission to usurp Eddie Brock's crown as the new King in Black; while Agent Anti-Venom, Anti Benton, Toxin, and their allies rush to stop him.

Carnage Vol 3 (2022-present), written by Ram V with art by Francesco Manna, is an ongoing series set to follow in the wake of Extreme Carnage and Carnage Forever, with the Carnage symbiote parting ways with Cletus Kasady's codex and claiming a new host to strike out on its own.