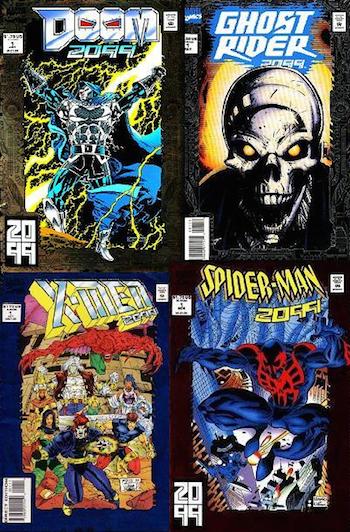 The Marvel Universe meets Cyberpunk, set in a Bad Future designated "Earth-928".note While Spider-Verse, Spider-Man 2099 Vol. 2 and 3, and The Amazing Spider-Man (Nick Spencer) #34 have retconned Earth-928 into being part of the same timeline as Earth-616 rather than an alternate universe that branched off Earth-616, it still carries its own universe designation in official databooks and other comics.

Roughly a century prior, a massive cataclysm brought about the end of the "Age of Heroes". The disaster also destroyed most of civilization, resulting in a much, much worse world than before. (And considering how bad it was before, that’s saying a lot.) The world is now run by massive Mega Corps (most notably Alchemax), the only police are the privatized Public Eye, and the entire planet is little more than a toxic deathball.

In the year 2099, however, four individuals suddenly get pulled into superheroism. Miguel O'Hara, a geneticist working for Alchemax, accidentally splices Spider DNA with his own. Paul Philip Ravage, executive for an environmentalist Alchemax subdivision, discovers corruption in his employer and goes on the lam to fight it. In distant Latveria, a long-lost dictator suddenly returns, and prepares to retake his homeland. Jake Gallows, a member of the private police force, becomes a violent vigilante when the law fails to condemn his family’s killer. Later, a small group of mutants gather in the Nevada desert. An amoral Hollywood producer turns on the Knights of Banner and is pelted with Gamma Rays. A hacker finds his personality trapped on the net, and is transported into a robot body to avenge his own death. Not to mention the many, many other heroes that began to crawl out of the woodwork...

Marvel 2099 was very much a product of The Dark Age of Comic Books, with Liefeldian physiques and ridiculous future slang. Nonetheless, the first four series (Spider-Man 2099, Ravage 2099, Doom 2099, and The Punisher 2099) sold extremely well. Spider-Man 2099 would become the most well-known series, and came to directly interact with the mainstream series. Doom 2099 featured exceptional writing, turning Doctor Doom into an Anti-Hero while still keeping him a Magnificent Bastard. Ravage was the only fully original character, and was written by Stan Lee for the first eight issues. Punisher 2099 was... well, a Dark Age comic, though it did have its moments of brilliance thanks to longtime writer Pat Mills, who had done substantial work on Judge Dredd.

2099's best strength, however, was its continuity. Editor Joey Cavalieri worked overtime to make sure every issue of the series fit, while also giving the creative staff considerable leeway in what they created. As a result, the series was akin to Marvel's Silver Age work; several comics that didn't cross over every month, but at the same time were clearly in the same universe, with events occurred concurrently. In fact, the lines only actually crossed over once, for the "Fall of the Hammer" story arc, and even that was tightly managed.

Facing declining sales, the comics culminated in the "One Nation Under Doom" event, where Doom took over the United States. It was inconceivably awesome, mostly because it was written by Warren Ellis.

Unfortunately, that was pretty much the end of it. Marvel, due to the effects of The Great Comics Crash of 1996, decided in a desperate bid to cut costs to fire Cavalieri. Nearly every writer quit in protest. The line limped along for a while, before every surviving series was canceled at once. In their place was "2099: World of Tomorrow," which ran for eight issues before also being cancelled. Finally, Marvel closed the universe off with "2099: Manifest Destiny."

Aside from some brief revisits, the entire 2099 franchise has largely become another part of geek trivia. Spider-Man 2099 has received some new attention from being featured in 21st-century Spider-Man video games, most notably Spider-Man: Shattered Dimensions and Spider-Man: Edge of Time. Oh, and he was also part of the Exiles for a while, and in the months just prior to Marvel NOW!, writers tease the fans the Peter Parker's replacement in The Superior Spider-Man would be his 2099 counterpart, though this would eventually be proven false. However, he was a major player in some arcs, which led to Alchemax being created in Earth-616. Miguel starred in a new ongoing series, and took part in the Spider-Verse Bat Family Crossover. In 2015, the 2099 timeline was one of the alternate universes featured in the third season of Ultimate Spider-Man, with Miguel appearing as one of the major characters. One of the mini-series featured in Secret Wars (2015) was Secret Wars 2099, a title focusing on the 2099 version of The Avengers (featuring analogues of Captain America, Iron Man, Black Widow, and Hawkeye).

In 2019, in celebration of Marvel's 80th anniversary, a storyline running through The Amazing Spider-Man (Nick Spencer) sees the 2099 universe rebooted as Peter and Miguel team up to save the future as well as a series of one-shots looking into 2099 versions of various characters, even Conan the Barbarian!

Comics in the original Marvel 2099 line: