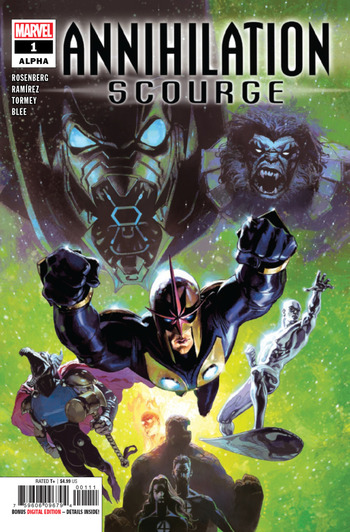 Annihilation: Scourge is a Marvel Comics crossover story that ran from November 2019 to December 2019. Written by Matthew Rosenberg, the series is a sequel to the Marvel stories, Annihilation and Annihilation: Conquest.

This comic, along with a concurrent Marvel 2099 event tested a new event format for the company which included an introduction, four one-shots focusing on each of the major characters, and a final "Omega" issue. Years after the Cancerverse's failed invasion of the Marvel Universe, the many angled ones launch a surprise attack in the Negative Zone, forming an alliance with the Sentry, whose Void persona had managed to separate from Bob Reynolds and take full control of his near limitless power. A handful of heroes band including Nova, the Fantastic Four, and the Silver Surfer band together to repel this invasion that infects the Negative Zone at a rapid rate before it could launch a second invasion of the main universe.