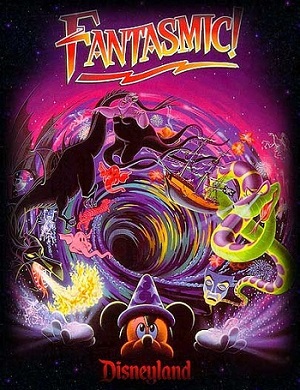 Imagination... Dream a fantastic dream...
Welcome to Fantasmic! Tonight, our friend and host Mickey Mouse uses his vivid imagination to create magical imagery for all to enjoy. Nothing is more wonderful than the imagination. For in a moment, you can experience a beautiful fantasy or an exiting adventure. But beware — nothing is more powerful than the imagination. For it could also expand your greatest fears into an overwhelming nightmare. Are the powers of Mickey's incredible imagination strong enough and bright enough to withstand the evil forces that invade Mickey's dreams? You are about to find out, for we invite to join Mickey and experience Fantasmic!, a journey beyond your wildest imagination...
—Introduction
Advertisement:

Fantasmic! is a nighttime show presented at the Disney Theme Parks, specifically Disneyland Park, the Disney Hollywood Studios at Walt Disney World, and (formerly) Tokyo DisneySea. It starts with Mickey Mouse having dreams inspired by such pieces of the Disney Animated Canon as Dumbo and Peter Pan. Eventually, the villains take over, and Mickey has to battle them in the center of his mind. What exactly Mickey dreams about, and how many villains he faces, differ depending on which theme park viewers watch the show at.

The show tells its story with help from people in Disney character suits, pyrotechnics, movie clips, and animatronics. The use of mist screens for projecting the clips felt especially innovative during the 1992 premiere at Disneyland. Only outranked by the Main Street Electrical Parade in fame, it still stands as one of the Disney Parks' most popular and beloved shows. The original show gave its last performance in January 2016, before construction on Star Wars: Galaxy's Edge caused a closure on the Rivers of America. When the show returned in July 2017, it boasted some new scenes and effects.