Ride / The Funtastic World of Hanna-Barbera 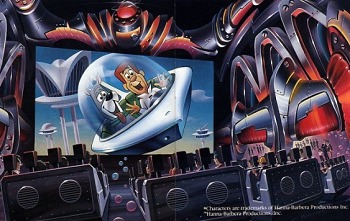 The Funtastic World of Hanna-Barbera was an animated simulator attraction that existed at several parks, most notably at Universal Studios Florida. The ride was a big Intercontinuity Crossover among some of the most famous Hanna-Barbera properties, including Yogi Bear, The Flintstones, Scooby-Doo, The Jetsons, and Dastardly and Muttley in Their Flying Machines.

It starts off with Bill Hanna and Joe Barbera demonstrating to the audience how cartoons are made as they draw a sketch of Elroy Jetson, which comes to life and goes right off the paper. After conversing with Elroy, the duo then goes on to mention how cartoons are also now being made by computers, which they also demonstrate by having a computer animate Dick Dastardly's spaceship. Dick Dastardly and Muttley, frustrated by the lack of attention they've been receiving, appear in the spaceship and demand to be the stars of Hanna-Barbera's next project. Bill and Joe refuse, stating that they intend for Elroy to be the focus of their next project (coincidentally, the ride opened a month before Jetsons: The Movie was released in theaters).

Feeling rejected, Dastardly and Muttley angrily kidnap Elroy, declaring that if they can't be the stars of Hanna-Barbera's next project, then no one will be. The conflict causes the computer to malfunction, and shortly after Bill and Joe make their escape, it forms a wormhole that sucks the guests into the world of Hanna-Barbera. There, Yogi Bear and Boo-Boo enlist the riders to assist them in rescuing Elroy from the two villains.

The attraction was one of the several opening-day attractions when the park itself opened on June 7, 1990; and it was humorously known for being the only ride that actually worked correctly on opening day, while the other rides were technical disasters initially.

While relatively popular in its prime, it closed on October 20, 2002. Its replacement was Jimmy Neutron's Nicktoon Blast, an attraction that was extremely similar in both theming and general concept. However, after an even shorter run of eight years, its replacement, too, closed down and was converted into Despicable Me: Minion Mayhem.

After closing at Universal Studios Florida, it went on to appear at several other theme parks, such as Canada's Wonderland, Carowinds, King's Island, Great America, King's Dominion, Six Flags Kentucky Kingdom, Mall of America, and Dollywood. At some of the locations, it did not include its pre-show and was known as Yogi's Wild Ride. It was not until sometime in the late 2000s that the attraction met its end and closed in all of the locations.

Here's a video (and pre-show) of the ride.

Tropes shown in The Funtastic World of Hanna-Barbera include: