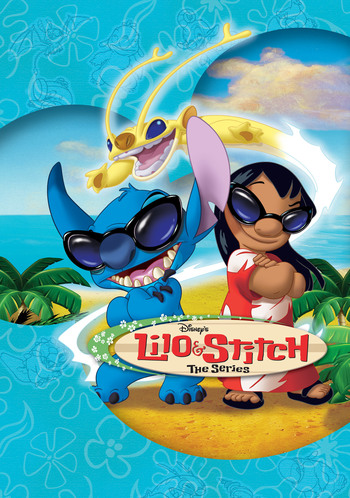 Lilo & Stitch: The Series (2003–2006), also titled just Lilo & Stitch, is the first sequel TV series to the Disney movie of the same name and its franchise, airing on ABC Kids and Disney Channel throughout its run. After the events of the film, Hawaiian girl Lilo is safe and happy with her sister Nani and their expanded family: alien experimental life-form Stitch, giant four-eyed mad scientist Jumba, and meek cycloptic ex-soldier-bureaucrat Pleakley.

As The Series begins, it is revealed that many other experiments of Stitch's lineage, of which he is number 626, have landed near Hawaii by accident (as shown in the direct-to-video pilot Stitch! The Movie). Stored in pods that activate one by one in freak occurrences (usually by dropping into water), each specialized experiment uses its unique power to wreak havoc on the island until it is captured. Lilo and Stitch's goal is to find a place in which each of Stitch's "cousins" can be useful and happy. Competing with them for each capture is movie bad guy Gantu, the now disgraced former galactic captain guard, who seeks to enslave the experiments for the even-eviler Doctor Hämsterviel, with the ever-reluctant assistance of Stitch's lazy, cowardly, sarcastic, sandwich-loving predecessor Experiment 625 (now known today as Reuben). After 65 episodes over two seasons,note The first season, consisting of the first 39 episodes, aired in a condensed time frame of less than six months, but the remaining 26 episodes representing the second season took nearly two years to get through for whatever reason. The Series closed out with the fourthnote Lilo & Stitch 2: Stitch Has a Glitch, which is separate from the show but released in 2005 during the show's run, is the third released film in the franchise and final movie, Leroy & Stitch. It has since been followed by two different spin-off shows each on their own timeline set after the last film; a Japanese anime called Stitch! from 2008 to 2015, and a Chinese animated series titled Stitch & Ai in 2017.

All 65 episodes can be watched on Disney+. For more information about the characters, especially those introduced during The Series, see the franchise's character sheet by clicking on the Characters button above.