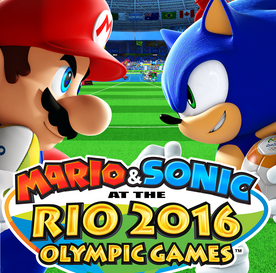 From rivals of the Console Wars to rivals on the Olympic playing field.
Advertisement:

A crossover between two works that are not within the same Canon or Continuity.

Having a Crossover between two related shows is one thing — it's not inconceivable that some of the Cheers cast should turn up in Frasier, is it? Or that characters from JAG could turn up on NCIS. Or that the CSI team might help out the guys in CSI: NY every now and again.

What happens when Jay and Silent Bob turn up in Scream 3? Or Cliff and Norm from Cheers book into St. Elsewhere for medical attention? Or a police officer from the grittily realistic Homicide: Life on the Street arrests Fox Mulder of The X-Files? Or the CSI team finds a corpse in a hotel that isn't a corpse, just Angel? Well, then you've got yourself a different kettle of fish altogether. And to add insult to injury, the fish are probably from Finding Nemo and The Little Mermaid.

Most crossovers of this kind are between properties that are owned by the same company or person, which makes legal wrangling easier. But sometimes characters will cross over into another company's properties, like the occasional events from rival comic book firms DC Comics and Marvel Comics.

It makes quite a difference whether the crossover reveals that the characters have supposedly been sharing the same world the whole time; or if they're "just" from Another Dimension. While not as big a deal if both series are "relatively" realistic, such as Crime Dramas, if each show has its own version of fantastic events a la Fantasy or Science Fiction; then the implication is that these elements have been existing side by side the whole time, unaware of each other. It also makes for some great Fridge Logic. "Hey, Problem A for Cast B is no big deal, if Cast A and B are friends, why don't they just ask for help?" Of course, Superman Stays Out of Gotham, and Reed Richards Is Useless as always.

which documents all known crossovers between TV series, except for cartoons. With this information, the site has been able to identify no fewer than 38 contiguous TV "universes" (as of March 2008) which are home to widely disparate (and apparently unlikely) combinations of series from different eras and networks. For instance, see Holbrook's "Group 2"

— ninety-four series (as of March 2012) ranging from Six Feet Under and Everybody Loves Raymond to Law & Order and The X-Files, taking in M*A*S*H, Cop Rock, and Home Improvement along the way. Thanks to the baroque web of interconnections and crossovers, it is suggested that these shows all inhabit the same universe. (Holbrook also discovered the "Jean-Claude Van Damme is dead

It has been noted on this and other sites

that the web of crossovers connects many shows, directly or indirectly, to St. Elsewhere. Since that entire series was shown in its final episode to be the fantasy of an autistic mental patient, it has become a Stock Epileptic Tree that all of reality is All Just a Dream of an autistic mental patient. In the words of Dwayne McDuffie, one of the executive producers of Justice League, "The last five minutes of St. Elsewhere is the only television show, ever. Everything else is a daydream."

Some fanfics specialise in lobbing together lots of fandoms together in one big Mega Crossover. (And speaking of fanfics, if you're not sure if a crossover exists for a given pair of fandoms, remember that Rule 50 is in effect - it probably exists somewhere.)

When this trope happens with three or more series instead of two, it's a Massive Multiplayer Crossover. When the two settings are blended so as to be one unified setting that partakes of elements from both, that's a Fusion Fic.

When each others' works of fiction appear in-universe as fiction in a stable fictional loop, that's Mutually Fictional. When a work of fiction itself appears in its own story, that's Recursive Canon.

Who would've thought that one day, the Irate Gamer would have a crossover, with the Nerd himself?

Who would've thought that one day, the Irate Gamer would have a crossover, with the Nerd himself?