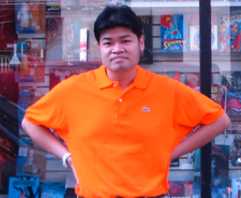 Bleedman, real name Vinson Ngo, is a Filipino artist known especially for his crossover works that gained notoriety in 2004 through his DeviantArt page (which can be found here

. His comics are currently being hosted at Snafu Comics

). Should be noted that his works are often Darker and Edgier versions of the material they are based on, and might be better read away from the prying eyes of children.

Works of his own:

, did the artwork for a story arc of Skull Boy

(which has since gotten it's own page on the site), and a guest page for the Panty and Stocking Season 2