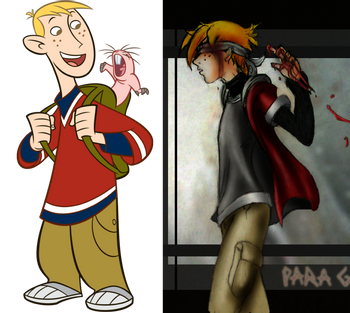 a double helping of Eye Scream.
This is probably a bit too dark for Frozen. Oh well, when has that ever stopped me?
— Author's Note on Kingdom of Isolation
Advertisement:

Deliberately writing a serious version of events related from a story which was originally quite lighthearted, "serious" in this case being more bleak, horrific, dark and/or possibly sadistic. Indeed, Dark Fic veritably wallows in (or savors) misery and darkness. This is sometimes satire, based on memes, or just writers flexing their creative muscles and showing us certain canonical elements that have the potential to be Nightmare Fuel. Or maybe the writer just enjoys depressing people with their writing style.

When badly done (especially when the original work was a comedy), it will do nothing but squick readers, who will quickly abandon it. Or it would unfairly ruin their views on certain characters. Or it would be so bad that it would even make them laugh. When well done, though, it can provide an intense and unsettling view of something supposedly familiar. Or it can make people laugh.

The Fan Fic version of Darker and Edgier. Related to Grimmification. Often the result of Fridge Horror, in which case it is the fandom equivalent of Ascended Fridge Horror.

Contrast with Fix Fic. A Dark Fic may or may not be the end result of a Deconstruction Fic. If the series was already dramatic and dark, it shouldn't really be here (e.g. it's impossible to make a dark fic of The Walking Dead unless you really take it to another level).

Comedies or series on the "idealistic" side of the Sliding Scale of Idealism Versus Cynicism tend to inspire Dark Fic; similarly, "realistic" or darker stories inspire W.A.F.F. fanfic. Can also be a Dark Parody if it's a Parody Fic.

Usually overlaps with Ron the Death Eater, where a normally good character is depicted as such.

Examples are sorted by the medium of origin