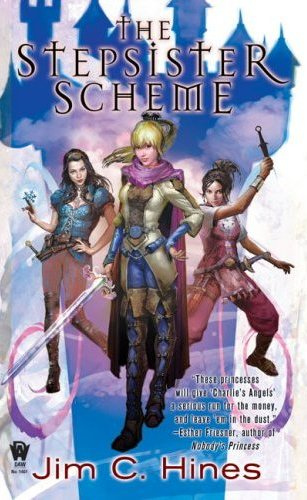 A book series by Jim C. Hines. In short, it's the Disney Princesses meets Charlie's Angels with Snow White, Cinderella, and Sleeping Beauty as the main characters.

It begins a few months after Cinderella (called Danielle in this version) has gotten married. She is adjusting to palace life when one of her stepsisters comes to see her. One magic-fueled assassination attempt later and Danielle has to deal not only with the fact that her stepsisters seem to know magic but that they have also kidnapped her husband Prince Armand. The only reason Danielle is still alive is because of the help of a fierce warrior woman called Talia, better known as Sleeping Beauty. She takes Danielle to see Queen Beatrice (Bea to her friends) who reveals that she runs the kingdom's spy service and introduces the princess to her other top agent, a master of mirror magic, Snow (as in White). Danielle must now team up with her fellow princesses to save the prince and stop her stepsisters.

Each book tells the further adventures of Danielle, Talia, and Snow. A major subversion of the classic princess tales since it’s the princesses who go out and save the day. The main characters' stories are well known in universe too. However, the versions circulated in rumor (the Disney versions) leave out or ignore major, often dark details (the Brothers Grimm versions). The princesses meet other well known characters like The Little Mermaid and Little Red Riding Hood.