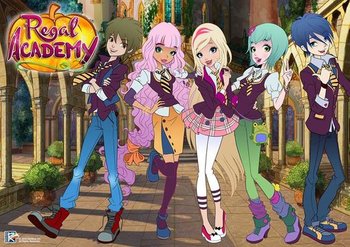 Regal Academy was created by Iginio Straffi and Joanne Lee for Rainbow SpA. As Rainbow's first entirely 3D CGI television series, it had an exceptionally long pre-production time, with about ten years passing between when pre-production materials were first spotted at MIPCOM and its broadcast debut on Rai YoYo on May 21, 2016. In the United States, it debuted on Nickelodeon on August 13, 2016, and since then it has appeared on Nickelodeon in many international markets.

The show follows Fairy Tale fangirl Rose, who falls into the Fairy Tale World just in time to be revealed as the long-lost granddaughter of Cinderella and enrolled in the titular school (which is really more of a Wizarding School than a Royal School despite the name) alongside team members Hawk SnowWhite, Travis Beast, Astoria Rapunzel, and Joy LeFrog. In season two, their group gains a new member, Ling Ling IronFan.

Together, they challenge their fellow students in a variety of assignments - especially local mean girl Vicky Broomstick - unless a fairy tale villain shows up. The show also spends a lot of time on the relationships between the characters and their famous Grandparents, especially focusing on the generation gap between them. Both the villains and the relationships are mostly Played for Laughs. Until they're not.