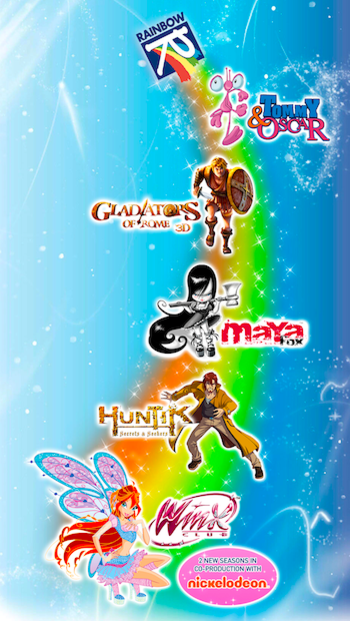 Rainbow S.r.l. is an Italian production company jointly owned by Iginio Straffi and Paramount (which also owns Nickelodeon). It is best known for its animated shows Winx Club and Huntik: Secrets & Seekers, as well as its comic series Maya Fox. In more recent years, the studio has branched out to theatrical films (Gladiators of Rome) and live-action shows (Club 57).
Advertisement:

Straffi, an animator and comic book artist, founded Rainbow in 1995 as an "underfunded animation service". For its first few years, Rainbow provided animation services for other companies, and it wasn't until 1999 that Straffi finally secured enough money to try out an original animation: Tommy and Oscar. In 2006, Iginio Straffi opened a second studio in Rome for 3D computer-animated projects.

In 2011, Viacom, Nickelodeon's parent company, purchased 30% of the studio for 62 million euros. This paved the way for many collaborations between the studio and the network; Rainbow would become the licensing agent for Nickelodeon's properties (including SpongeBob SquarePants and Victorious) across Italy.

In 2013, Rainbow went through a financial setback. Rainbow's Gladiators of Rome bombed at the worldwide box office, earning less than €9 million against a €40 million production budget. Including advertising costs, the budget was upwards of €70 million, according to Straffi.

By the end of 2013, Viacom Italia had lost 15.8 million euros as a direct result of their co-ownership of Rainbow. The studio wrapped up The New '10s by co-producing Club 57 with Nickelodeon.

Productions from the studio:

Rainbow productions that never materialized included "a cartoon for adults ... along the lines of ''The Simpsons''

" and a Maya Fox spin-off movie.