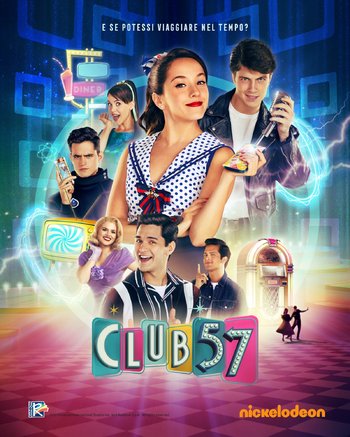 There's no time to lose!
Advertisement:

Club 57 is an Italian-American TV series co-developed by Rainbow SpA and Nickelodeon, which are both part of Viacom. The show was produced by Pierluigi Gazzolo and Iginio Straffi (creator of Rainbow/Nickelodeon's Winx Club), based on an idea created by Catharina Ledeboer. It was filmed in Apulia, Italy and Miami, Florida.

The show began production in 2016. It's a mix of Sci-Fi with Teen Drama and focuses on two siblings, Eva (Evaluna Montaner) and Ruben (Sebastián Silva), who discover their grandfather's time machine. They accidentally send themselves to the year 1957, where Eva meets an Italian greaser boy named JJ (Riccardo Frascari), beginning a Time-Travel Romance between the two. Before Eva and Ruben can get back home, they have to convince their grandfather Manuel (Andrés Mercado) that they're his future grandkids and wait for him to build his time machine. Oh, and they have to avoid a group of interdimensional Time Police who are after them. It Makes Sense in Context.