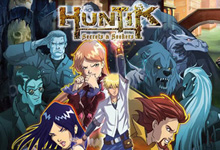 An Italian Animesque series created by Iginio Straffi and produced by Rainbow SpA, a studio jointly owned by Straffi and Viacom. Straffi devised Huntik in 2006 as a Darker and Edgier Spiritual Successor to his previous Rainbow show, Winx Club, which he initially planned to finish in 2007. After Winx was extended for more seasons, Straffi was tasked with directing and producing both shows, and it's safe to say that the bulk of his attention was focused on Huntik.

The series centers on a team of four adventurers who belong to the Huntik Foundation, an alliance of Seekers with noble purposes who try to find and investigate magical artifacts. The team consists of Dante Vale, the Foundation's top operative; Lok Lambert, a teenager with a knack for puzzles; Sophie Casterwill, Lok's rich classmate; and Zhalia Moon, an orphan who was raised as a spy for the Foundation's enemy, "The Organization".

Season One kicks off after Lok and Sophie discover a journal belonging to Lok's missing father, alongside a mysterious amulet. Within mere moments, they are attacked by "The Suits", henchmen under the employment of The Organization. The two manage to drive away the suits with the help of Dante. Dante informs Lok of his destiny as a Seeker, a person who can use magic and bond with magical creatures called Titans. Now Lok and his new friends must use the knowledge contained within his father's journal to find other Titans and to keep them out of the world-domination-seeking hands of The Organization.

Season Two dwells more on the historical side of the Seekers, and expands on Sophie and the Casterwill family as a whole. The primary villains are a cult of sorts called The Blood Spiral Brotherhood led by none other than the previous season's Dragon, Rassimov. Teenage orphan Den Fears also joins Lok's group part way in.