Anime / The Legend of Snow White 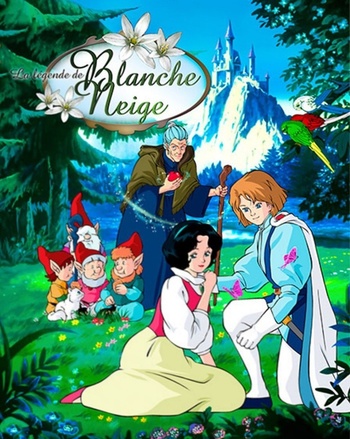 The Legend of Snow White (白雪姫の伝説 Shirayuki Hime no Densetsu in Japanese, La leggenda di Biancaneve in Italian) is a 1994-1995 Japanese-Italian co-production anime based on the Grimm Brothers' most famous fairy tale, Snow White. It considerably expands Snow White's story over its 52 episodes, adding Fantasy elements much beyond the basic Fairy Tale scope. While the series never came to home release in the USA, it can be viewed for free

It's a lovely day in the kingdom of the Emerald Valley, a beautiful princess is born. Her parents, King Conrad and Queen Isabelle, name her Snow White. The little girl grows loved, happy and healthy, and she is offered three pets on her fourth birthday: a puppy, a cat and a dove. Soon, however, Queen Isabelle falls ill and dies.

King Conrad marries Lady Chrystal and makes her the new Queen. Queen Chrystal turns out to be not only an evil, selfish, ambitious step-mother, she also practices the black arts of witchcraft. After the King departs for war, she makes Snow White's life a hell as she is jealous of her famed beauty after her magic mirror told her Snow White is the most beautiful woman in the whole kingdom.

Thanks to Queen Chrystal's huntsman being unable to follow the order to kill Snow White, the princess flees in the forest and ends up in a cosy little cottage, which is home to seven dwarves. She befriends them and eventually makes their life happier, gaining trusted allies to protect her from Queen Chrystal's wrath.

The Legend of Snow White provides examples of: