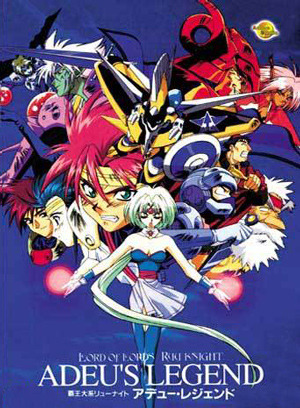 In a world where a giant sword stands upon a land full of adventure and magic, a world called Earth Tear. This is the story of heroes who journeyed tirelessly across Earth Tear!

It takes place in the mythical world of Earth Tear where, far off in the distance, a giant sword can be seen thrust into the very land itself. Legend has it that whoever journeys to the Earth Blade will become the greatest warrior alive and one of the many warriors to take up this quest is the young aspiring knight-in-training, Adeu the Sonic.

Life is not easy for the idealistic young warrior who, in his very first appearance, gets all of his money suckered out of him by a pair of street urchins. The world is closer to a post-apocalyptic, Fist of the North Star-esque land than the standard fantasy medieval setting in parts, and people are consistently terrorised by outlaws riding powerful mecha called Solids. Fortunately, Adeu has a secret weapon of his own: one of the legendary Ryu, which outclasses any Solid in combat power, the Ryu Knight, Zephyr. With Zephyr at his side Adeu is almost unstoppable but the challenge has only just begun.

Eventually he is joined by Paffy, a princess and an apprentice mage who is on a journey to strengthen her powers. Accompanying her are Sarutobi, a ninja who acts as her bodyguard, and Izumi, one of her own retainers and a noble priest with amazing strength. Together the four battle against the evil that infests Earth Tear and draw ever closer to their ultimate goal - the Earth Blade itself.

Though not the most popular giant mecha anime, it was successful enough to get 3 OVAs and a video game.

Here's some tropes from the Ethos of Chivalry!: