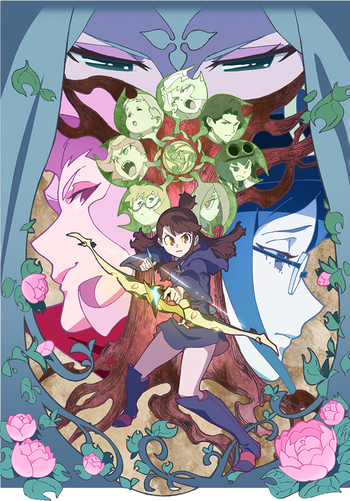 When she was a young girl, Atsuko "Akko" Kagari attended a magic show by the witch Shiny Chariot and became enamored with Chariot's ability to spark joy in her audience. Some years later, Akko arrives at Luna Nova, a prestigious academy for witches, in an attempt to follow in her idol's footsteps. But because she was raised in a non-magical family, Akko is out of place in wizarding society and has very little natural aptitude for sorcery. And to her dismay, she learns that her idol Chariot is not regarded highly in the magical world, which considers her magic to be cheap party tricks.

But in true Plucky Girl fashion, Akko doesn't let these deter her — even if her haughty classmate Diana disapproves, Akko still has her friends Lotte and Sucy and her Cool Teacher Ursula by her side. Things begin to change, however, when Akko discovers Chariot's old wand, the Shiny Rod, which she can use with surprising aptitude even as magic everywhere begins to decline, on top of seeing her get tasked to find seven mysterious words, which could be Akko's key to not only achieve her dreams, but potentially save magic to boot…

A manga adaptation based off the series by Keisuke Satō premiered around the same time the series did, which consisted of a mixture of retold existing stories and new stories made for the manga. The manga ran on Monthly Shōnen Ace from January 26th, 2017 to August 26th, 2018 and consisted of 17 chapters.

On July 11th, 2017, Bandai Namco would go on to announce a video game set in the same continuity as the TV series. The game in question, titled Little Witch Academia: Chamber of Time, would be released on PC via Steam and the PlayStation 4 on November 30th, 2017 in Japan and May 15th, 2018 worldwide.

Another game based on the series, Little Witch Academia: VR Broom Racing, would later be announced by Univers and would be released on the Oculus Quest on October 13th, 2020 and the Oculus Rift, PlayStation VR and SteamVR on June 13th, 2021.

A second season was originally planned

shortly after the series completed. However, unforeseen circumstances would lead to the season getting shelved, with Yoshinari moving on to other projects such as Brand New Animal instead. Yoshinari however, has made it clear that he's still interested in doing a second season. Whether or not it happens remains to be seen…

Not to be confused with the 2013 short film of the same name.