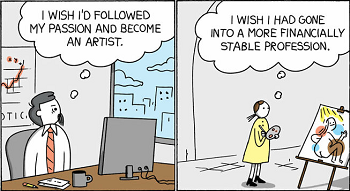 One character, or group, sees another character or group as better off...but then they and/or the audience discover that those they envy are actually just as jealous of them (or perhaps even more so). Basically, this is for when envy is portrayed as a two-way street.

This at times is needed to give some perspective to characters who need it.

Often the setup for a "Freaky Friday" Flip and may end up in a Perspective Reversal. Can sometimes be found in The Glorious War of Sisterly Rivalry. Compare Be Careful What You Wish For, which often has a similar basis and reasoning and is sometimes found in the same works. See also Grass Is Greener.