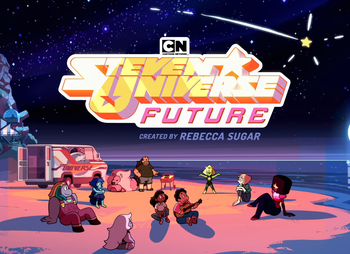 Steven Universe: Future is a 20-episode Cartoon Network action/adventure Mini Series created by Rebecca Sugar. Serving as an extended epilogue to the original series and television movie, Future premiered on December 7th, 2019 and ended on March 27th, 2020, with a four-part finale.

It has been a few months since the events of the film; the universe has finally been freed from the tyrannical rule of the Gem Empire and the Earth is now officially considered an independent planet. With new endeavors in place to acclimate Gems to the brand new status quo, including a small community just outside Beach City known as Little Homeworld, a now 16-year-old Steven Universe aims to continue helping everyone as best he can in the new age of Era 3.

However, Steven has overlooked one thing: with all the major, world-threatening issues having been laid to rest, and many of his friends now comfortably moving forward in their own lives, no one actually needs our hero to help them anymore. As Steven enters adulthood and runs out of other people's problems to solve, he finds himself realizing that the only ones left are his own. From lingering mother issues, the surprise development of new Diamond abilities, and his general uncertainty about what the future holds, Steven discovers that even the savior of the universe has some challenges to overcome and lessons to learn in the midst of "happily ever after".

Steven Universe Future has examples of:

Cactus Steven seems to sprout an arm primarily for the sole purpose of angrily pointing at his master and firing back his remarks.

I Am My Monster

Cactus Steven seems to sprout an arm primarily for the sole purpose of angrily pointing at his master and firing back his remarks.

I Am My Monster