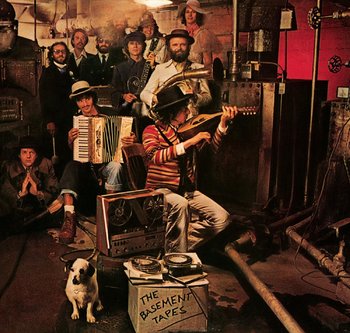 "It's a wicked life but what the hell / Oh, everybody's got to eat..."
"With Dylan, so much has been said about him, it's difficult so say anything about him that hasn't already been said, and say it better. Suffice it to say Dylan is a planet to be explored. For a songwriter, Dylan is as essential as a hammer and nails and a saw are to a carpenter. I like my music with the rinds and the seeds and pulp left in — so the bootlegs I obtained in the Sixties and Seventies, where the noise and grit of the tapes became inseparable from the music, are essential to me. His journey as a songwriter is the stuff of myth, because he lives within the ether of the songs. Hail, hail "The Basement Tapes". I heard most of these songs on bootlegs first. There is a joy and an abandon to this record; it's also a history lesson."
— Tom Waits, who put The Basement Tapes in sixth place in his personal list of 20 favourite albums, The Guardian, 20 March 2005.
Advertisement:

In the summer of 1967, Dylan had been on a break from the music business for a year after the fabled motorcycle crash following his world tour in 1966. (According to himself, he just really wanted to spend some time with his family.) When his former backing band The Hawks moved into a house down the road from him in Woodstock, New York, they soon started getting together in its basement for informal jams on old folk, blues, country, gospel and rock'n'roll tunes, and Dylan eventually started bringing newly-written material in the same vein. By the end of 1967, The Hawks had transformed themselves from a rowdy bar band to roots rock legends The Band, and Dylan had written dozens of songs including "I Shall Be Released", "You Ain't Goin' Nowhere", "Crash On The Levee (Down In The Flood)", "This Wheel's On Fire", "Tears Of Rage", and "Quinn The Eskimo (The Mighty Quinn)".

As far as Dylan and The Band were concerned, these were demos of songs they might record in the future (The Band would indeed record several of them for their first album), but many of the songs were also circulated to record companies in the hope that other bands would cover them. Inevitably, these wound up in the wrong hands, and "the basement tapes", as they soon became known, wound up setting the pattern for bootleg recordings in rock music, being sold under the counter in countless record shops and even being reviewed in major magazines as "Dylan's lost masterpiece".

Columbia Records finally released an official version of The Basement Tapes in 1975 to general critical acclaim, though some were disappointed that some of the best-known tracks were left off, while others were "improved" with newly-recorded overdubs, and the album was padded with unrelated songs The Band had recorded (without Dylan) between 1968 and 1975. While the official release still held a lot of great music, the bootleggers didn't go out of business. In The '80s, fans got ahold of a bunch of higher quality reels, giving the jam sessions and song sketches their first public airings, resulting in several highly-sought after bootleg CD sets. Famed music critic Greil Marcus even devoted a whole book to the then-unreleased recordings.note 1997's Invisible Republic, later retitled The Old, Weird America

Over the years, The Basement Tapes — official and unofficial — have been seen by many as some of the most influential recordings of Dylan's career, with the mix of old and new themes and styles anticipating both country rock and Alternative Country, while completely revamping his approach to song-writing. Even though many of the songs are simple and full of silly wordplay, they often have dark undertones and play on old folk traditions — what Marcus called "the old, weird America".

The (essentially) complete basement tapes finally got an official release in 2014 as part of Dylan's ongoing Bootleg Series, both as a double CD of highlights and as a 6-CD, 139-song set.

For a complete list of all songs recorded at the sessions, see the other wiki

These tropes are on fire, rolling down the road: