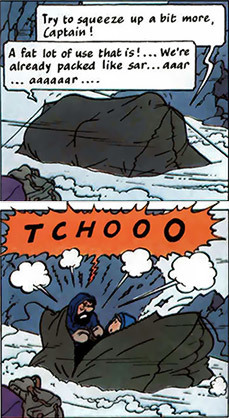 "Don't you just hate it when your boogers freeze?"
— Calvin, Calvin and Hobbes
Advertisement:

A character sneezes from being cold. Maybe he's outside in a blizzard or in an arctic setting, or maybe has been trapped in a freezer. Maybe the character has been walking in the rain. He might also have been pushed into a fountain, pool, etc. and his clothes are completely soaked and he's standing there shivering. This may or may not mean the character is getting sick; he might start sneezing in the cold environment but then stop once he warms up.

See also Catch Your Death of Cold, for the durable old wives' tale that going out in the cold makes you catch a cold.

Example of:
Catch Your Death of Cold