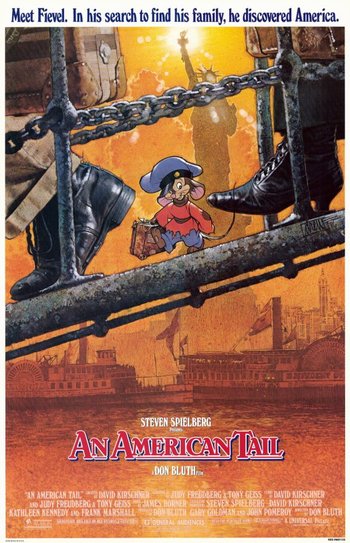 ''Meet Fievel. In his search to find his family, he discovered America.''
"Qu'est-ce que c'est?note What is that? A little immigrant. Now they are coming by bottle."
Advertisement:

A collaboration between Don Bluth and Steven Spielberg (and the latter's first animated production), An American Tail starts off on Hanukkah in 1885, opening in a Russian schtetl. The camera pans past the house belonging to the human Moskowitz family to reveal a tiny duplicate house inhabited by the Mousekewitz family. They are Jewish-Russian mice who are forced to escape persecution after their village is destroyed in a pogrom by Cossack cats.

Believing in the American dream, they head to New York City by boat because "there are no cats in America, and the streets are paved with cheese." The hero, a little mouse named Fievel, is washed overboard in a storm, and his search for his family, who believe he is dead and therefore aren't looking for him, forms the bulk of the film. Once arriving in America, all mice immediately discover that there are indeed cats in America. They begin living in a typical late 19th century immigrant manner: working in a sweatshop, living in horrible conditions, being extorted by gangs and living in constant fear of being eaten.note Okay, that last one is specific to immigrant mice, but you get the picture.

Such is the plot of the most popular animated film of the 1980s that doesn't involve a singing crab. It was a surprise hit at the box office in 1986, and it became the highest grossing animated film of all time, much to Disney's sheer horror. It would keep this title until the debut of the next Don Bluth film, The Land Before Time. The popularity of both these films continued in Bluth's efforts in his previous film to reinvigorate classical animation into the public consciousness at a time when the industry was in a slump, convincing Disney to step up its game in face of the competition, making this film one of the biggest contributions to The Renaissance Age of Animation.

Tellingly, more people remember the song "Somewhere Out There" than, say, the immigrant struggle aspect.

Almost as well known is the Lighter and Softer Contested Sequel, Fievel Goes West, in which the Mousekewitz family, still dirt poor and at the mercy of ever-more-sophisticated cats, flee New York for the Wild West (made without Bluth's involvement, but with Spielberg still on board), but largely forgotten is the short-lived TV series in the same setting (Fievel's American Tails), and two additional DTV sequels (The Treasure of Manhattan Island and Mystery of the Night Monster) that played fast and loose with the established continuity, and had no involvement from the original creators. Have we mentioned that Don Bluth films tend to suffer from this sort of thing? note Let's just be glad the number of movies made never reached double digits.

No Cats in America

No Cats in America