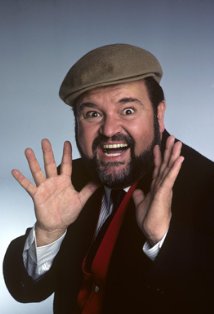 "I became a comedian when they laughed at my serious acting."
Advertisement:

Recognized instantly by young moviegoers of the Eighties and Nineties for his constantly wheezing voice and constantly cheerful, if quirky, disposition, Dominick "Dom" DeLuise (August 1, 1933 — May 4, 2009) first started his acting profession on stage, his first role being Tinker the toymaker in a local children's program, soon moving on to comedies like the off-Broadway "The Jackass", where he truly started to shine. In fact, former partner Mel Brooks once quipped that when he hired Dom for one of his films, he would "instinctively add another two days to the schedule because of the constant laughter Dom provided on the set". Along with Brooks, Dom was a regular player in Don Bluth films, often being the only actor to reprise their characters in the many Direct to Video sequels they received.

He voiced Duke in Father of the Pride.

In addition to his acting, DeLuise had a successful second career as a gourmet cook, publishing two cookbooks, Eat This... It'll Make You Feel Better and Eat This Too!, as well as an instructional CD-ROM, Cooking With Dom DeLuise. He managed to have fun with this in his acting work by playing characters who were either involved in the culinary arts or liked to cook.

DeLuise died on May 4, 2009 of kidney failure and respiratory complications from cancer at age 75.

He has three sons, two of whom (Peter and Michael) became featured players of the early Fox TV series, 21 Jump Street and a third (David) who has an interesting resume himself.

Works Dom DeLuise has appeared in: