Western Animation / Father of the Pride 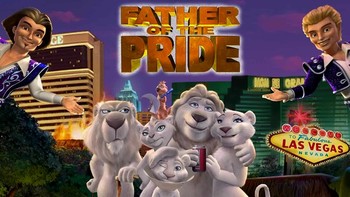 Father of the Pride is a short-lived computer-animated sitcom. It was the first television production produced by DreamWorks Animation, as well as the first show to use feature film quality CGI. It aired on NBC from August 31, 2004 to May 27, 2005.
Advertisement:

Set in Las Vegas, the series depicts the secret lives of the animals who live there. The main characters are the family of white lions (father Larry, mother Kate, teenage daughter Sierra, young son Hunter, and father-in-law Sarmoti) that form part of Siegfried & Roy's act. All the other animals in the Secret Garden (S&R's private zoo) basically act as sitcom neighbors.

The series was heavily hyped during the Olympics before it premiered and featured loads of celebrities in regular and cameo roles. DreamWorks had high hopes for it, but before the premiere, Roy was attacked by one of his tigers, putting a pall on the proceedings. Despite this, the duo insisted that The Show Must Go On.

However, the series was a flop anyhow for several reasons. For one, it was very uncomfortable to watch the show with Roy's then-recent mauling in mind, even if he and Siegfried enjoyed it. Many airings were repeatedly interrupted by updates on the 2004 presidential election and by that point, there had been such a glut of advertising that audiences were sick of it; it didn't help that, despite the show being meant for adults, it was promoted as being "From the creators of Shrek", which landed it in hot water with Moral Guardians. Plus, the series was too expensive and time-consuming, with each episode costing over 1.5 million dollars to make and over nine months to completenote To compare, an average episode of The Simpsons costs half of that and production is three months shorter.. Some episodes never aired in the U.S. (with one that was never finished being animated), though the entire series was released on DVD.

Father of the Pride is mainly remembered now for being one of the most colossal flops in the history of prime-time animation, which prompted DWA to bury this series deep in their animation archives, eventually having more success in children's shows.

Ever since its cancellation, petitions have spread online demanding the series' revival; it is unknown if these efforts will succeed. Nevertheless, on July 15, 2020, the streaming service Peacock launched nationwide, including Father of the Pride as one of its re-aired shows.

Tropes of the Pride:

Larry is put on a diet and his growling stomach causes confusion and discomfort.

Larry is put on a diet and his growling stomach causes confusion and discomfort.