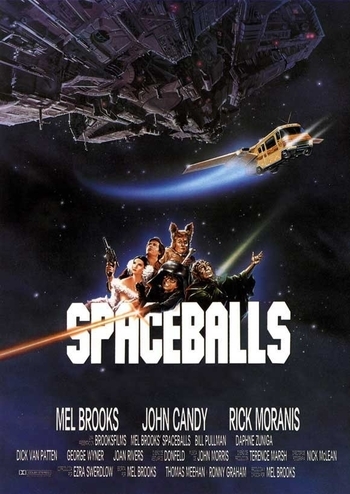 The evil leaders of Planet
Spaceball, having foolishly
squandered their precious
atmosphere, have devised a
secret plan to take every
breath of air away from
their peace-loving neighbor,
Planet Druidia.

Today is Princess Vespa's
wedding day. Unbeknownst
to the princess but knownst
to us, danger lurks in the
stars above...

If you can read this, you
don't need glasses.
Advertisement:

Spaceballs is a 1987 farcical comedy film directed by Mel Brooks which does for Science Fiction — especially Star Wars — what Blazing Saddles did for The Western.

Princess Vespa (Daphne Zuniga) — the bold, bossy and beautiful heir to the throne of planet Druidia — is fleeing her intended marriage to the painfully dull Prince Valium (Jim J. Bullock), the only eligible bachelor prince in her region of space. Unfortunately, Vespa and her robot servant Dot Matrix (performed by Lorene Yarnellnote of Shields and Yarnell; voiced by Joan Rivers) acquire the attention of the Spaceballs, a group of spacefaring evildoers — led by Dark Helmet (Rick Moranis) and President Skroob (Mel Brooks) — who plan to seize Vespa and hold her hostage in exchange for access to Druidia's oxygen (in order to drain it away and use it to replenish their homeworld's own thinning atmosphere).

All hope lies with two rogues-for-hire: Lone Starr (Bill Pullman) and Barf the Mawg (John Candy), who hope to use the substantial reward offered by Vespa's father to pay off their debt to crime boss Pizza the Hutt (voiced by Dom DeLuise). With a little help from wise-cracking mystic Master Yogurt (also Mel Brooks), Lone Starr fights to save Planet Druidia, defeat the Spaceballs, and (maybe) get the girl, too.

Of course, it's all just a big excuse to let Mel Brooks make fun of sci-fi tropes for ninety minutes.

Noted for being the final film released by MGM to have been shot at the studio's historic backlot at Culver City under their ownership. More specifically, Stages 27 and 30 were utilized to film all of the interior scenes at Yogurt's temple and the interior scenes for both the bridge of the Spaceball One and Spaceball City, respectively. Shortly after filming wrapped up, MGM sold the studio backlot to Lorimar-Telepictures.

An Animated Adaptation of the film, simply titled Spaceballs: The Animated Series, was in Development Hell for much of the 2000s. G4, who eventually gained the rights to it, ended up promoting the show a year before it was set to air and by the time it finally did, it had already been canceled after only 13 episodes.

It turns out that's the combination of President Skroob's luggage.

Example of:
The Merch