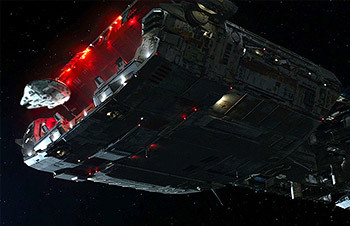 In a nutshell, this is when a hostile force attacks a target by using a much larger vehicle with a large door to chase down and then "swallow" the target vehicle. The attackers have just performed the Mega Maw Maneuver. The reasons for using this tactic are usually as a form of piracy. Once inside the large vehicle, the target is at the mercy of its captors, and can be easily boarded, plundered, or seized without risking damage in a firefight.

While certainly an interesting maneuver, it does pose several problems in Real Life. For one, its success hinges upon the maw ship being much larger and much faster than its victims. For another, the very real possibility of the target performing some desperate evasive action trying to get away would pose considerable danger. Sometimes Tractor Beams are used to speed up the chase and/or explain away why the target isn't performing any evasive actions. And finally, if it happening in space, the bigger ship is a subject of the Kzinti Lesson, if the smaller ship will turn their engines on while inside of the maw.

In other words, if there was any real potential to this tactic, it probably would have been tried by now.

Not to be confused with maneuvering with Mega Maw.

Compare: Swallowed Whole, which is this trope but with monsters, and Driving into a Truck.