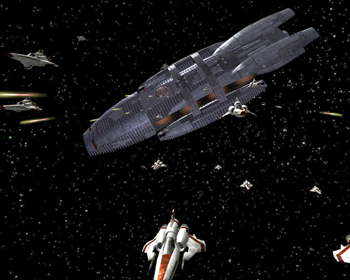 The flagship of the future that encompasses both artillery and piloting tropes: a hybrid carrier/battleship.

During World War II, the honored tradition of building more and more powerful gun-toting battleships came to an abrupt halt when naval artillery became largely supplanted by the aircraft carrier. It had none of the battleship's armament and durability, but it could project force hundreds of kilometers away, without ever endangering the ship itself — which made most WWII aerial/naval battles decidedly one-sided.

Modern warfare may eventually subvert this trend. Currently, major warships that aren't carriers or amphibious assault ships are missile ships, each capable of launching a relative Macross Missile Massacre, so the other side better hope it isn't Point Defenseless. As missile technology and remote piloting advance, the aircraft launched by the carrier may become unmanned smart munitions, blurring the line between missiles and attack craft.

However, warfare largely dominated by purely automated systems can take away from importance of human characters in a war story. Thus, authors are likely to explain that missile combat didn't take for various reasons, such as abundance of electronic countermeasures to disrupt missile guidance, accurate point defenses, or electronic warfare potentially compromising the effectiveness of remotely piloted (or automated) craft.

This progression takes us back to the battlestar: It has the heavy armor and big guns of a battleship, along with the fighters and point defense weapons of a carrier. This makes perfect sense, assuming carrying fighters in space makes sense, because:

This trope is named for the Battlestarnote a portmanteau of battle starship class of warships from Battlestar Galactica (1978), one of the first such depictions to reach widespread audiences. Often part of a Standard Sci-Fi Fleet. May also have a "little brother", the Airborne Aircraft Carrier. Naturally comes hand-in-hand with the Space Fighter; given that strikecraft are an important part of a Battlestar, see also their Analysis page for some arguments on their use or lack thereof, which may have knock-on effects on the feasibility of Battlestars.

As a general rule, the Battlestar is portrayed in one of three ways:

The largest ones may be examples of Mile-Long Ship or even Planet Spaceship.

Not to be confused with the 1981 game show Battlestars, the elite Autobot fighters from Transformers: Return of Convoy, or John Walker's former sidekick.

Compare/Contrast with its primary competing/companion trope, The Dreaded Dreadnought. Both fixtures of a Standard Sci-Fi Fleet, but both can and do appear in other settings. Both usually occupying the slot of "scariest thing around," but while the Battlestar is about the vessel's combined aircraft carrier/battleship nature, The Dreaded Dreadnought is about the tendency to call the scariest vehicle in a setting a "Dreadnought."