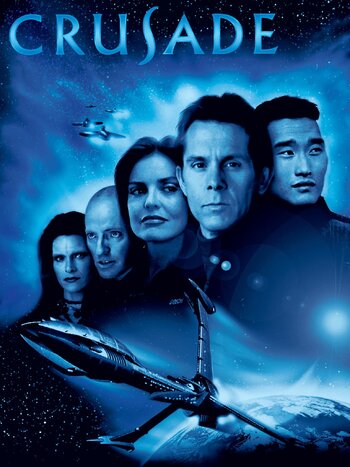 "Just so we're clear: Once we go, this is my command. I'll do whatever's necessary. If that means turning the entire galaxy upside down and shaking its pockets to see what falls out, that's what I'll do. I'm not subtle, I'm not pretty, and I'll piss off a helluva lot of people along the way, but I'll get the job done."
—Captain Matthew Gideon
Advertisement:

A 1999 aftershow following on the heels Babylon 5, which concluded in '98. Set on the prototype starship Excalibur, the last of her class following the destruction of the Earth Alliance shipyards, she embarks on the search for a counter-agent to the slow-acting bio-weapon which was deployed against Earth in the B5 telemovie A Call to Arms. Crusade brings back two characters who were introduced in that movie: Galen the Technomage and Dureena the alien thief.

Only 13 episodes were completed out of a planned 22-episode season, and it was canceled before the first episode even aired. Relations between showrunner J. Michael Straczynski and the network broke down in mid-production: it was commissioned by TNT, whose understanding of the series pretty much stopped at We'll be rolling in money if this is as popular as B5 was!—and who then discovered that this wasn't the case. Due to the mid-season retool, which included an attempt to write-in a second pilot with a whole new set of uniforms, there is no canonical order of episodes to watch this show in.

Funnily, the disintegration of the show is referenced in its screenplays: The crew find themselves in situations that resonated with the showrunner's inability to get the show made, and some of the dialog is acidic, to say the least. Then again, if the head writer is faced with cancellation no matter what he does, why not have some fun while at it?

In the decades since its cancellation, more details have come out about where the series was headed. Check out the WCHB page for B5 for more.