Literature / Empire from the Ashes 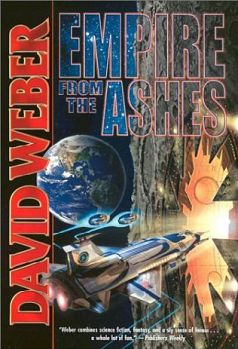 Cover of the omnibus edition.
About 50,000 years ago there was a mutiny aboard Fourth Imperium Starship Dahak. This was a bad thing, seeing as Dahak was an Utu-class warship the size of a large planetoid, with enough firepower to very easily destroy planets. The ship's captain was taken by surprise and had only one option to prevent the takeover; he poisoned the air, forcing everyone to evacuate, and then directed the ship's AI to shoot down any ships that tried to reboard.
Advertisement:

The mutineers escaped in armed shuttles to the planet Dahak orbited. Some loyal crew escaped in tiny lifeboats, but no loyal officer survived who could countermand the captain's last order. Nobody could re-enter Dahak at all, so both groups had to try and make a new life, marooned on the uninhabited planet.

And that's just the backstory.

20 Minutes into the Future, Lieutenant Commander Colin MacIntyre is on a mission to map the dark side of the Moon. Imagine his surprise when it kidnaps him instead! Dahak has been waiting abandoned in orbit, camouflaged and disguised as the Moon. Its AI has been awake and idle the whole time, unable to act due to conflicting orders. It forces Colin to become its new captain, so it can finally bring the mutineers to justice and free Dahak to attend its other duties.

What other duties? Dahak was originally stationed to defend against an invasion by the "Achuultani". Those mysterious aliens make periodic genocidal rampages, eradicating all intelligent life they encounter, and were responsible for the destruction of three previous galaxy-spanning empires. By the time Colin first hears this explanation, Dahak has detected clear signs that the next invasion wave is on its way— and the Fourth Imperium is not responding...

Empire from the Ashes is the omnibus re-issue of David Weber's Dahak trilogy, which consists of Mutineers' Moon, The Armageddon Inheritance, and Heirs of Empire. The entire series was included on several of the Baen CDs which can be legally downloaded here