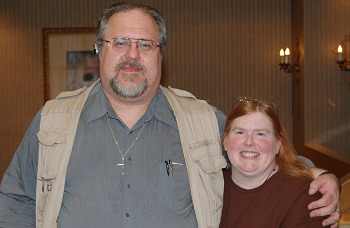 David Weber with his wife, Sharon.
"I'm a storyteller. I enjoy telling stories; it's as simple as that."
Advertisement:

Known for showing his work in Infodumps, even when using creative libertiesnote though at least Magic A Is Magic A remains in force. Has a thing for Asian female protagonists. Due to injured hands, he dictates (into a computer) Door Stoppers of ever-increasing length.

He's also a naval historian, and boy does it show.

He has several major series including:

Some tropes common to David Weber's works are: