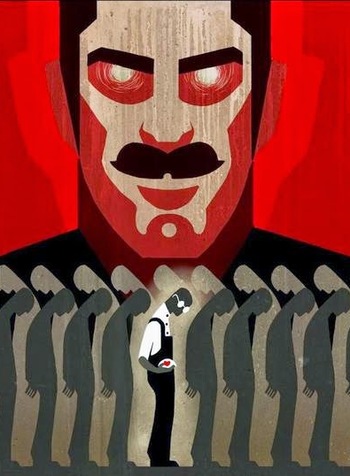 A dictatorship is an undemocratic government, typically under the control of a singular leader or a group, that controls a country through repression of dissent and alternative political factions. Dictatorships are always authoritarian and sometimes outright totalitarian, demanding the obedience of the citizenry, controlling how the people can express themselves, promoting support through propaganda, and persecuting anyone who refuses to play ball. Other methods may include keeping the masses pacified through Bread and Circuses, encouraging citizens to spy on each other, or giving the people enemies to rail against. They may justify the measures they take by claiming to be promoting internal stability, saying they're protecting the citizens from threats, or using any number of other explanations. Whether they believe these explanations or not varies.

There are multiple varieties a dictatorship can come in, not all of them necessarily mutually exclusive. Here are some common forms that have been identified by political scientists:

The term "dictatorship" didn't always have the pejorative connotations of illegitimate and excessive authority it does today. In the days of The Roman Republic, a dictator referred to a politician or magistrate who was temporarily entrusted with the full authority of the state during a time of crisis. By law, a Roman dictator could only act within the mandate appointed to him, and he had to surrender his authority either once the crisis was resolved or once six months had passed; whichever came first. However, when the office was revived under Sulla and later Julius Caesar after falling out of use for over a century, the position of dictator became closer to how the term is seen today: dictators could rule for much longer, and they had the power to unilaterally modify the Roman constitution and appoint people to high-ranking magistracies and the Senate.

While there's not exactly a clear line between a dictatorship and a monarchy, the two forms of government are generally considered distinct, even when it comes to monarchies that hold significant power in both theory and practice. Generally, a monarchy is an established hereditary system, where the monarch has to share power with the court, the aristocracy and/or an elected legislature. There are also generally traditions limiting how far the monarch can go. A dictatorship, on the other hand, generally has no checks on its power. Another difference is that a monarchy is usually an established hereditary system with the weight of tradition behind it, whereas a dictatorship's power is usually considered illegitimate, often at least partly because it came to power through underhanded or extralegal means. That being said, there can be overlap, especially when the monarch is an absolute monarch with no respect for the rule of law. Some monarchies can become dictatorial if the monarch gathers all power to themself. On the other hand, a dictator may attempt to obtain legitimacy and/or cement their rule by proclaiming themself a monarch. There's even a term for a government that is both a monarchy and a dictatorship: a monarchic dictatorship. Before the term "monarchic dictatorship" was coined, dictatorial monarchs were typically referred to as despots. Or, if they were particularly forward-thinking, enlightened despots.

Dictatorships are of course very much Truth in Television. However, if you want to add Real Life examples, please follow the Rule of Cautious Editing Judgement and include well-documented, objective examples.

Super-Trope to Banana Republic, Commie Land, Intellectually Supported Tyranny, Regent for Life, and Police State. The Theocracy will often be this. When the United States is portrayed like this, see Oppressive States of America. Should a dictatorship try to present itself as democratic, you may have a People's Republic of Tyranny. Day of the Jackboot is when people attempt to impose a dictatorship. If The Republic, Monarchy, or similiarly democratic nation is taken over by a despot, that's also Tyrant Takes the Helm and/or The Usurper. Frequently overlaps with The Empire, though not all dictatorships are imperialistic. Very prone to being an outright Crapsack World or Crapsaccharine World, especially if The Dictatorship tries to present itself as a paradise. See also Dystopia.

The Atlantis archivist explains how the One Earth Regime rose to power and what they do.

The Atlantis archivist explains how the One Earth Regime rose to power and what they do.