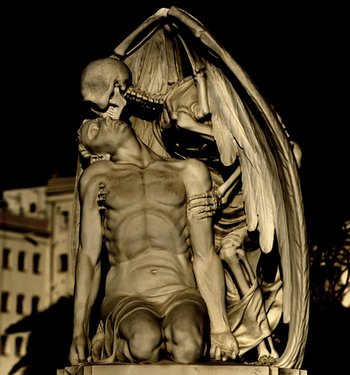 Silverbolt: I know what you're thinking. You don't know whether to kiss me or kill me.
Blackarachnia: I'm a black widow spider, you idiot! I can do both.
— Transformers: Beast Wars
Advertisement:

The primary instincts of all creatures — sex and death. If you can combine the two they become a bigger selling point. We're not talking about Death by Sex or Interplay of Sex and Violence but something else.

Though not exactly graphic, the Kiss of Death is still sensual, seductive, and very, very deadly. While a character may be anxious about administering the Kiss of Life, nobody is shy about giving the Kiss of Death. This may be because Evil Is Sexy or the more practical reason — once somebody catches onto what the kisser is going to do, they'd run for the hills. This is a favorite weapon of The Vamp.

The Kiss of Death comes in many varieties, including: hypnosis, narcotic effect, and sucking out the soul of the victim, which may or may not result in death, depending on the story.

In addition, the Kiss of Death can also be a symbolic gesture — the kiss itself does not bring death or harm, but the person who receives it knows that his days are numbered. The trope is named for the kiss from The Bible with which Judas Iscariot identified Jesus among his apostles and thus betrayed him to the Romans, making this Older Than Feudalism.

The PG-rated form of Out with a Bang. Not to be confused with Last Kiss, though it can overlap if the right circumstances are met.

See also Kiss of the Vampire, where a vampire's bite is both pleasurable and deadly. This trope is not to be confused with the 1947 film Kiss of Death, which does not even feature this trope.

Sister Trope to the Touch of Death.

This is a death trope, so Spoilers ahoy.