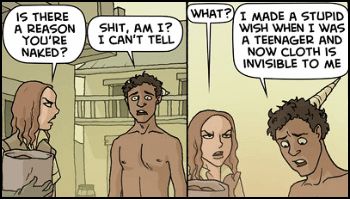 Be Careful What You Wish For... otherwise, you'll wind up like this moron.
"And as he drove on, the rain clouds dragged down the sky after him for, though he did not know it, Rob McKenna was a Rain God. All he knew was that his working days were miserable and he had a succession of lousy holidays. All the clouds knew was that they loved him and wanted to be near him, to cherish him and to water him."
— So Long, and Thanks for All the Fish
Advertisement:

One way or the other, something you think is going to be useful turns out to be worthless.

Blessed with Suck is one of those tropes that comes in a few distinct flavors. Generally, it's when a character is given a special ability that seems to cause nothing but trouble:

This blessing may take the form of Applied Phlebotinum, privileges, or special abilities. For artistic cases (real or (self-) imagined), see Muse Abuse.

May be caused by a Literal Genie. May also result in With Great Power Comes Great Insanity either as part of the blessing or a result of its psychological effects.

Opposite side of the same coin from Cursed with Awesome, in which a "curse" actually is cool and helps the character, even if they refuse to believe it and just want to be normal. If the "blessing" is somehow removed via Aesop learning, then the Curse Is Foiled Again. If a character is given a lame power but manages to use it to great effect, you've found that Heart Is an Awesome Power.

This is Older Than Feudalism, and it's a perfect way to teach the Aesop of Be Careful What You Wish For. Supertrope to Does Not Know His Own Strength, Immunity Disability, Midas Touch, So Beautiful, It's a Curse, and Who Wants to Live Forever?.

Compare/contrast with Awesome, but Impractical (which it is often mistaken for by the looks of most of the tropes), Super Loser, Super Zeroes, Power Incontinence, Bad Powers, Bad People. See also Curse. Contrast a Curse That Cures, when a Curse cures a character of an illness or disease they already had. For characters blessed with awesome, see With Great Power Comes Great Perks.

Are we sure the Madrigals' Gifts are truly gifts?

Are we sure the Madrigals' Gifts are truly gifts?