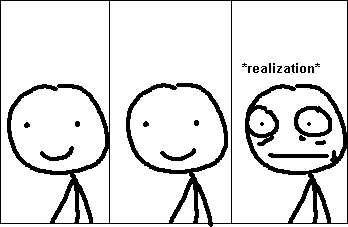 "What happened to all the sadness and horror that used to traumatize children in the '80s? Where did we go wrong? Fortunately, the traumatizing moments are still there, just better hidden."
— Carl Hoff

Fridge Horror is, simply put, when something becomes terrifying after the fact. Maybe you thought about this or that plot point a little too hard, and suddenly you realize that everyone was trapped in stasis forever, or that the lovable child will grow up in a world where everyone around her is dead. This can be either intentional or unintentional by the author.

If you're looking for a trope about the scary things in people's fridges, then you should go to It Came from the Fridge. Or possibly Stuffed in the Fridge. Compare Deconstruction, where the Real Life consequences of a trope reveals its flaws. Contrast Fridge Brilliance, the difference being that the realization is insightful rather than frightening (though the two can overlap). A leading cause of Surprise Creepy. Contrast Backstory Horror, when this is overt and Word of God. Also see Oh, Crap!, the expression people will likely have after realizing such horror.

It should also be noted that authors sometimes unwittingly inflict Fridge Horror on themselves, when they realize the implications of whatever it is they wrote.

In short, this trope can be best summed up as Fridge Logic + Nightmare Fuel.

Let's Meet the Meat is a common cause for this in adverts.

When a work incorporates the Fridge Horror into canon, it's Ascended Fridge Horror. When a character in-story contemplates something that seemed innocuous and then realizes the horror, it's Explain, Explain... Oh, Crap!. In certain cooking shows with literal horrors in the fridge, that would be Squick.

Compare Played for Horror (which sometimes can be a writer applying fridge horror to a trope).

Not to be confused with Unfortunate Implications, which is about something that is meant to be innocent coming off as more offensive than intended.