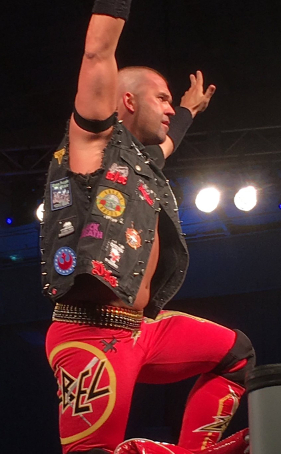 The Future is now.
Frankie Kazarian (born Frank Benedict Gerdelman on August 4, 1977 in Palm Springs, California) is an American professional wrestler of Armenian descent best known for his years of work in TNA and Ring of Honor, and currently wrestling for All Elite Wrestling.
Advertisement:

First trained by Killer Kowalski in 1998, Kazarian started out on the independent scene in California, with notable companies including the Empire Wrestling Federation, Millennium Pro Wrestling, Ultimate Pro Wrestling (where he trained alongside friends such as Samoa Joe, Christopher Daniels, and John Cena, as well as teamed with former ECW alumnus Mike "Nova" Bucci as Evolution (not to be mistaken with a certain faction whose leader was also a Kowalski alumnus), and especially Pro Wrestling Guerilla, winning titles in many of these promotions. Notable brushes with the mainstream during this time include a match with he and Nova against star WWF tag team Edge and Christian and a prophetic run-in with Mike Tenay at a WCW event.

Speaking of which. In 2003, then-TNA President Jeff Jarrett and road agent Scott D'Amore invited him for a tryout, as they knew him from a previous World Wrestling Association show, and decided they liked him enough to start booking him with the company and having him as one of the star competitors for the X-Division Championship. He ended up becoming X-Division Champion

the first time in March of 2004, losing the belt to AJ Styles three months later and forming an alliance with Michael Shane to take the title from AJ, which eventually formed into a tag team known by fans as Shazarian and managed by Shane's on-screen valet (and Kazarian's future wife) Traci Brooks.

He briefly left TNA to see if WWE possessed greener pastures, but ended up returning with only a month's worth of a Velocity winning streak under his belt when they tried to get him to cut his hair and he refused (in addition to him realizing that they had no plans on revamping their Cruiserweight division). He returned to the indies, then to TNA and his team with Michael Shane (now going by his real name Matt Bentley due to trademark issues), before the two were repackaged as part of a gothic faction also involving Johnny Devine, revealed to have become understudies to Raven. As part of the gimmick, while Devine and Bentley were renamed Havok and Martyr, Kazarian simply had his name shortened to Kaz. This was a significant hint that he'd retained some sense of his individuality and that the angle was mostly meant to get him over as he would rebel against Raven, turn face, and overcome Serotonin. He would embark on the biggest push of his TNA career, being marketed as a fearless competitor and athlete, defeating Christian Cage in a ladder match for a shot at Kurt Angle's TNA World Heavyweight Championship, and even coming just short of defeating Angle. Other angles included a tag team with Eric Young and his superhero alter ego, usually to fight against James Mitchell's team of monsters, and a stint in the World X Cup in which he failed to get the victory for Team TNA, which was used to write him out as having fallen out of love with wrestling so that he could be used as the masked video game character Suicide.

He ended up exchanging the Suicide role back and forth with good friend Christopher Daniels due to injury, including during an X-Division Championship run, which was used in a storyline where other X-Division competitors tried to unmask Suicide thinking it was Daniels. After losing the title, he later entered both a feud and an alliance with "The Pope" D'Angelo Dinero, before eventually being taken out of the Suicide role to compete as himself again early on into Hulk Hogan and Eric Bischoff's tenure basically running TNA.

After briefly competing as a face in the X-Division again, Kazarian ended in an angle with Ric Flair and his recently-turned heel protégé AJ Styles in which Flair started shifting his favor towards Kaz instead of AJ, though it turned out he actually wanted them both under his wing—which turned out to be the start of the faction Fortune, TNA Originals intent on taking their company back from outsider forces while acting as successors to the legacy of Flair's legendary faction, the Four Horsemen. Both as heels against EV2.0 (ECW wrestlers in favor with Dixie Carter) and as faces against Immortal (Hogan and Bischoff's conspiracy, which Flair initially had them acting as a part of until they turned behind his back), Fortune remained true to their mission and were one of the most well-liked factions in the history of TNA. During this time, Kaz once again claimed a few months with the X-Division title.

When the group imploded due to the turns of both Christopher Daniels and Bobby Roode, Kazarian and Styles stuck together as a tag team until Daniels convinced Kazarian to turn on AJ Styles over a series of illicit secrets, creating a months-long drama which was ultimately resolved with each "secret" being revealed as being fabricated in a plan meant to ruin AJ's reputation. For Kaz and Daniels, this ultimately resulted in the creation of their tag team Bad Influencenote named after the first tag team in Kazarian's career back in EWF with Josh Galaxy, who won the TNA World Tag Team Championship

twice over the years and engaged in various stories with their former Fortune stablemates, Austin Aries, and Joseph Park/Abyss, before eventually leaving TNA in spring/summer 2014.

Upon leaving TNA, Daniels took Kazarian with him back to Ring of Honor, where they have resumed their tag team under the name of The Addiction. While first presenting themselves as faces due to Daniels' homecoming and feuding with the ROH-purist Decade group (with ironically a similar mission to Fortune), they eventually turned heel after being revealed as the masterminds behind an "invasion" scheme called the Knights of the Rising Dawn, meant to create misdirection as well as bring in ex-TNA ally Chris Sabin so they could steal the ROH World Tag Team Titles

from reDRagon (Bobby Fish and Kyle O'Reilly). In 2017, he became the newest member of the Bullet Club. And then he didn't. That same year, Scorpio Sky would join The Addiction with the group being named SoCal Uncensored (SCU).

Along with Daniels, Sky, and The Elite, Kazarian would leave ROH in 2019 after Final Battle in order to join AEW, where he and Sky would become the promotion's inaugural World Tag Team Champions.

"The Coolest Tropes in Wrestling":